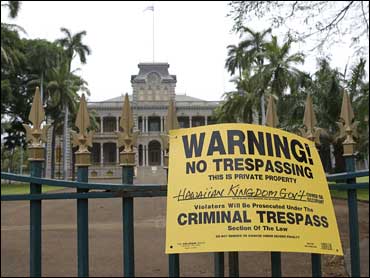 Surrounded by royal guards and the occasional tourist, Her Majesty Mahealani Kahau and her government ministers hold court every day under a tent outside the palace of Hawaii's last monarch, passing laws and discussing how to secure reparations for the Native Hawaiian people.

Kahau and her followers are members of the self-proclaimed Hawaiian Kingdom Government, which is devoted to restoring the Hawaiian monarchy overthrown in 1893. Nearly two months ago, they stormed the gates of the old Iolani Palace, and they have politely occupied the grounds ever since, operating like a government-in-exile.

"We're here to assume and resume what is already ours and what has always been ours," said Kahau, who is a descendant of Hawaii's last king and was elected "head of state" by the group.

The Hawaiian Kingdom Government, which was founded seven years ago and claims 1,000 followers, uses its own license plates and maintains its own judicial system. In recent years, members have voted to dissolve the state of Hawaii, its land titles, welfare programs and public schools. They also claim the right to confiscate all bank assets in Hawaii.

The organization's actions do not carry the force of law, and the state has mostly taken a hands-off approach. It has not confiscated any of the license plates, for example, or arrested anyone for using them.

Hawaii has about 200,000 Native Hawaiians out of a population of 1.3 million. The Hawaiian Kingdom Government is just one of several native organizations that claim sovereignty over the islands, tapping into a strong sense among Native Hawaiians that they were wronged by history.

More than a century ago, a group of sugar planters and other businessmen, most of them Americans, overthrew the Hawaiian monarchy with the support of U.S. military forces. Queen Liliuokalani was imprisoned at the ornate Iolani Palace, built in 1882 by her brother, King Kalakaua. Hawaii was annexed by the United States in 1898 and became a state in 1959.

"We are definitely trying to correct a wrong that we feel has been done to us as a people," said Hawaiian Kingdom Government spokesman Orrin Kupau.

On April 30, members of the Hawaiian Kingdom Government trooped onto the palace grounds in the heart of Honolulu and shut the gates behind them, leading to a few tense hours before they finally reopened the entrance.

Every day, Kahau and about a dozen of her government officials meet in the tent. Every evening they fold up their tent and go home, returning in the morning.

State officials have largely ignored them, and police have made no arrests. The Hawaiian Kingdom Government has said it has no intention of resorting to violence.

Every week, the Hawaiian Kingdom Government obtains a public-assembly permit that allows it to occupy the grounds of the palace, a museum and popular tourist attraction next door to the state Capitol.

As far as the state is concerned, the Hawaiian Kingdom Government is treated the same as any other group that wants to conduct activities on public ground, said Deborah Ward, spokeswoman for the Department of Land and Natural Resources.

"As long as they comply with the permit conditions, they may continue to request permits to meet," she said.

Those conditions prohibit the Hawaiian Kingdom Government from interfering with access to the palace, harassing pedestrians, collecting money, posting banners or entering several government buildings. State authorities gave Kahau a warning when she went inside one of the buildings to collect her mail.

It is unclear how the organization's members intend to oust the state government. They also want reparations in the form of housing, low-cost health care and cash. The kingdom slapped a $7 trillion fine on the Hawaii state government in 2007.

A professor of international law who favors Hawaiian independence, Francis Boyle, said he believes the Hawaiian Kingdom Government has a valid claim.

"The essence of sovereignty under international law is people living on their land and asserting their rights, and that's what the Native Hawaiians are doing. They've made a lot of progress," said Boyle, a professor at the University of Illinois. "This is the way to go."

A state agency, the Office of Hawaiian Affairs, is pursuing something far short of a restoration of the monarchy. It is pressing for federal legislation that would give Native Hawaiians a degree of self-government similar to what many American Indian tribes have. The hope is that Native Hawaiians will also regain some of their ancestral land.

The legislation has passed the U.S. House and is pending in the Senate.

"There's got to be a legal way in which to try to get these issues resolved," said OHA Administrator Clyde Namuo.

Cleaning company is more profitable than it was pre-COVID

Owner of home-cleaning service said the funds allowed him to restructure his small business. Now it's more efficient.