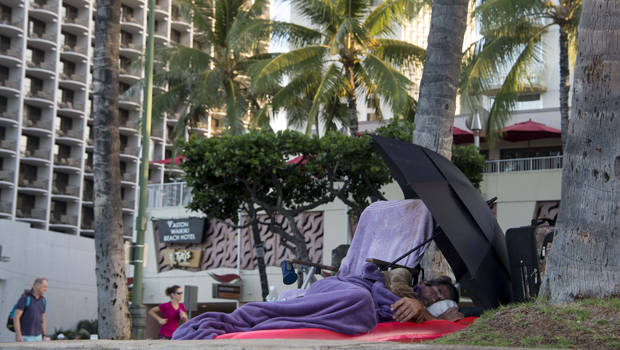 HONOLULU -- Honolulu Mayor Kirk Caldwell has vetoed a bill that would have expanded the city's ban on sitting and lying down on sidewalks.

Caldwell has been a champion of the city's sit-lie bans, which began in Waikiki after complaints from the tourism industry and local residents and expanded to include Chinatown and other commercial areas.

But Caldwell said Thursday that the city would face legal challenges if he signed Bill 6 into law, which could jeopardize Honolulu's existing sit-lie bans. His administration proposed an alternative that he says the city can defend.

"We want to make sure that any bill that we pass, particularly when it deals with people's civil rights, that we do things that are defendable," Caldwell said.

Caldwell explained that the previous sit-lie bills targeted sidewalks in business districts, but the expansion recently approved by the council was problematic because it extended the bans into some noncommercial areas such as the bank of a canal where a small tent city emerged.

"If it looks like the government is trying to target homeless just because they're homeless, that's where you open up this direct attack saying these bills are not about commerce, it's not about using our sidewalks to conduct business, it's about going after homeless folks," Caldwell said.

"It could jeopardize other sit-lie bills that are working very well outside this community," Caldwell added.

When the city approved its first sit-lie ban in September, officials planned to set up a temporary open-air shelter in Sand Island, so that homeless people moved away from resorts could be moved to an industrial location that was used during World War II as a an internment camp for Japanese Americans. But the proposed site was near a wastewater treatment plant and former dump, and under criticism, the plan never materialized.

Now, some city council members are pushing for a friendlier alternative to Sand Island. They want to set up a shelter and service center in the flagship store of Hilo Hattie, the Hawaii-themed fashion retailer that filed for Chapter 11 bankruptcy in February.

The city is working on a letter of intent to the bankruptcy court to explore the possibilities at the Hilo Hattie location, said Roy Amemiya, Honolulu's managing director.

"We have never promised we are going to solve homelessness, and I don't think anyone who does is being honest," Caldwell said. "But I think we can make a dent."

Depending on how it's set up, the building could provide shelter to hundreds of homeless people, and could include space for service providers, Manahan said. But Amemiya said he's been warned by social services workers that housing up to 800 people in one location is ill-advised, and it would be better to use multiple locations.

"I consider it to be a better plan than just putting tents up in Sand Island," Manahan said. Plus, because the store's building is set up to welcome busloads of tourists from Waikiki, it can accommodate the city's plan to bus homeless people from the same location, he said. "Hilo Hattie was just kind of a natural fit for that."

Hilo Hattie was originally looking for a buyer to take over the lease that would allow it to continue operating a retail location there, but if the building becomes a shelter, that's unlikely to happen, said Mark Storfer, executive vice president of Hilo Hattie. There's already an offer in for $4.8 million from a California developer to take over the 43-year lease hold that Pomare Ltd., Hilo Hattie's parent company, owns on the property, Storfer said.

"If the city and county comes in with a bid over the $4.8 million that makes sense, then Pomare would agree, and that would be the end of that," Storfer said.