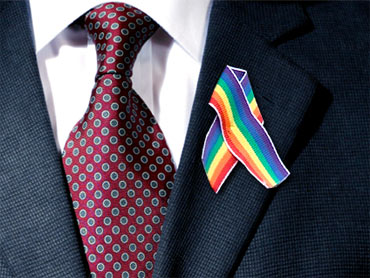 A memorable moment at last week's Conservative Political Action Conference could mark a turning point in the long-fraught relationship between gays and the Republican Party.

CPAC is perhaps the nation's premiere conservative gathering, a convivial opportunity for impassioned right-wing activists to network, plan for upcoming elections and listen to the biggest names in the conservative movement. It's the sort of atmosphere in which the casual observer might expect someone like Ryan Sorba to receive a warm welcome.

Sorba, who wrote a book entitled "The Gay Gene Hoax," took the podium at this year's CPAC and immediately expressed his unhappiness that the conference had allowed a gay Republican group called GOProud to be a sponsor.

He didn't get very far. After delivering a rambling condemnation of homosexuality, Sorba was essentially booed offstage, prompting him to angrily complain to his conservative audience that "the lesbians at Smith College protest better than you do."

Gay Republicans say it was a telling moment: Evidence that the GOP is "moving away from a negative hate-based connotation with homosexuals in the Republican party," according to Charles T. Moran, spokesman for the Log Cabin Republicans, a gay Republican group.

"The conservative movement is so focused on the issues that bring us together -- limited government, personal responsibility and freedom -- that the social issues have kind of gotten pushed off to the side," he said. "Even the Tea Party movement - these people are not talking about social issues."

That isn't to say there hasn't been controversy: Liberty University Law School pulled its sponsorship of the event over GOProud's inclusion as a sponsor, and the American Family Association's Bryan Fischer said following the conference that true conservatives should abandon CPAC for the AFA's Values Voter Summit, where organizers believe "that protecting one man - one woman marriage is the most fundamental conservative value of all."

But Jimmy LaSalvia, the executive director of GOProud, said his group was largely welcomed at CPAC, particularly after the Sorba incident.

"The most notable thing about CPAC is that the American Conservative Union makes a concerted effort to make sure young people are there," he said. "And that room was full of people who are under 30 years old."

While polls suggest young Americans have not moved leftward on abortion, there has been a clear shift, even among conservatives, toward greater tolerance of homosexuality. (Last year Meghan McCain, a gay marriage supporter, told the Log Cabin Republicans that "old school Republicans" are "scared s**tless" of the changing landscape.) Discussing the military's "Don't Ask, Don't Tell" policy with ABC News earlier this month, former Vice President Dick Cheney said he expected repeal.

"The society has moved on," he said. "It's partly a generational question."

GOProud's LaSalvia is a strong backer of Cheney, and along with others in his organization is backing a "Draft Cheney 2012" Web site. He says he agrees with the former vice president on his support for state-by-state same-sex marriage as well as Cheney's positions on national security and other issues. 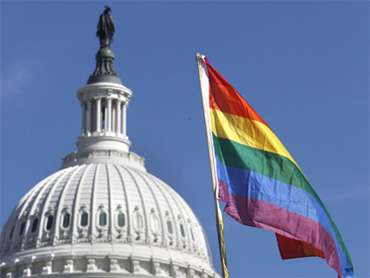 (AP)
"The greatest threat to gay and lesbian people across the globe is the spread of radicalized Islam, and the Obama administration playing footsie with [Iranian President Mahmoud] Ahmadinejad or any other brutal dictator is not good for gay people," he said.

Moran of the Log Cabin Republicans said that people had begun to stop seeing a contradiction between being conservative and openly gay.

"Do not assume that just because we support equality issues we support a big government agenda of government takeover of health care, labor unions, climate change mumbo jumbo," he said, adding that his group is working to "break those assumptions."

Mathew Staver, dean of the evangelical Liberty University School of Law and founder and chair of the Liberty Counsel, says that he and his allies "certainly don't support the idea that anybody would be eliminated from the political process because of their sexual orientation."

But he said Liberty University School of Law felt compelled to pull its sponsorship from CPAC over GOProud's support for the repeal of "Don't Ask, Don't Tell" and other policies.

"Those are not conservative policies, and they are not supported by the Republican Party," he said, noting that the GOP continues to oppose a "Don't Ask, Don't Tell" repeal as well as same-sex marriage and hate crimes protections based on gender identity. "I welcome all people being part of the conversation, but I also think that just because of your individual orientation, it does not mean that we change the values that conservatives support."

Asked if he was disappointed with Sorba's reception, Staver noted that Ron Paul won the CPAC straw poll of 2012 presidential candidates - evidence, he suggested, that those in the room were not "reflective of the conservative movement or the Republican Party."

Republicans have largely shied away from gay rights issues over the past year, including in the campaigns of Massachusetts Sen. Scott Brown and the party's two successful gubernatorial candidates, New Jersey's Chris Christie and Virginia's Bob McDonnell. (The latter aggressively played 2003 down remarks that "certain homosexual conduct" could disqualify someone to serve as a judge, opting instead for a relentless focus on jobs and fiscal issues.) Though he identifies as a "social and fiscal conservative," the candidate generating the most excitement on the right at the moment -- Florida Senate candidate Marco Rubio -- focuses largely on fiscal issues in his speeches.

"They've all run their campaigns on the issues that people care about when they sit down at night at the kitchen table," said LaSalvia, arguing that Republicans have little incentive to try to score points by discussing gays and lesbians in the current political landscape. "It's a political winner to focus on other issues."