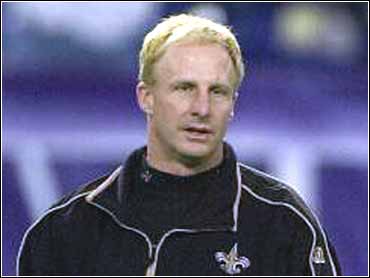 In the Year of the Coach, the job Jim Haslett did in New Orleans was the most outstanding.

Haslett, in his first season coaching the Saints, beat a strong field to win The Associated Press NFL Coach of the Year award, announced Saturday.

Haslett, who took over a perennially underachieving team that had reached rock bottom and turned it into the NFC West champion, easily beat Philadelphia's Andy Reid in balloting by a nationwide panel of 50 sports writers and broadcaster who cover pro football.

"Guys that had been here a long time, that had never won, never had a winning season, that takes a toll on you," said Haslett, who stepped into the mess Mike Ditka created. "The franchise wasn't in great shape, after four bad years.

"I don't think we're where we want to be yet, but I think we have a good start, a good foundation," added Haslett, whose Saints went 10-6 to supplant the defending NFL champion St. Louis Rams in the NFC West.

New Orleans then beat St. Louis last week for its first postseason victory, before losing to Minnesota 34-16 in Saturday's playoffs.

"We've set a standard already, and now everyone has to live up to it," Haslett said.

There wasn't much to live up to in New Orleans. For three decades, the Saints generally have been tailenders. Ditka traded his entire 1999 draft and some of the team's 2000 selections to get running back Ricky Williams.

Haslett, a former NFL linebacker, was the defensive coordinator in Pittsburgh before being hired by new Saints general manager Randy Mueller to replace Ditka. Together, they spent wisely in free agency and brought in 32 players.

Among those additions were quarterbacks Jeff Blake and Aaron Brooks, defensive tackle Norman Hand, wide receiver Joe Horn and safety Darren Perry. All were instrumental in the Saints' turnaround.

As was Haslett, who received 30 1/2 votes. Reid got 9 1/2 for leading the Eagles from 5-11 to 11-5 and into the playoffs. They were followed by Tennessee's Jeff Fisher, Oakland's Jon Gruden and the New York Giants' Jim Fassel with two apiece. Getting one vote each were Miami's Dave Wannstedt, Baltimore's Brian Billick, Denver's Mike Shanahan, and San Francisco's Steve Mariucci.

"You never know how long it's going to take so many new people o come together and coalesce as a team," Mueller said. "Jim was the catalyst for that.

"What he's done has been close to what I expected. I knew we had to have someone who was tireless, who would spend every day and long nights getting this turned around. It's a shame, but to do this you have to put your personal life on hold and Jim's done that."

Haslett is the second Saints coach to win the award. Jim Mora got it in 1987.

Last year's winner was Dick Vermeil of the Rams.