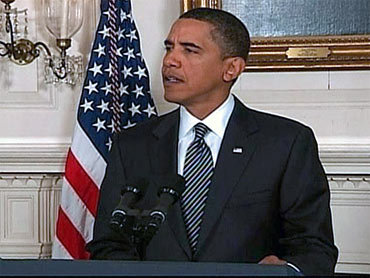 (CBS)
Everyone's angry today. The left. The right. The independents. But what about President Obama?

That was the theme of Wednesday's press conference at the White House where press secretary Robert Gibbs was pressed repeatedly by reporters about President Obama's state of mind following the massacre in Massachusetts.

Was he getting worked up? Can you give the public some kind of clue that there's a heart beating beneath Mr. Obama's Spock-like personna?

"When does President Obama get angry?" a reporter asked. "I mean, it seems like that might be part of the disconnect. He always offers such a sort of calm and cool and cerebral approach to some of these things. Is there any --is there any sort of thought to needing to show a little bit more of that anger himself?"

Truthfully, I thought the inquisition into Mr. Obama's temperament was silly. Who wants a manic commander-in-chief at the helm? But then ABC aired its interview with the president exuding his usual cool demeanor. Considering the magnitude of the defeat his party - and its agenda - had just suffered, maybe a little too cool for comfort. But in the intervening 24 hours Mr. Obama managed to discover his inner populist.

The president brought down the hammer in pointed remarks aimed at the banking community. It was time to choose, he said. Going forward, he warned, you either can engage in commercial banking or in proprietary trading - but no longer both. Just to make sure nobody missed the passion behind his words, Mr. Obama threw a hard jab at what he termed "an army of industry lobbyists from Wall Street descending on Capitol Hill to try and block basic and common-sense rules of the road that would protect our economy and the American people."

The president topped it off with this Bush-like bring-it-on invitation to any interests seeking to block his plans for financial reform.

"So if these folks want a fight, it's a fight I'm ready to have," he said. "And my resolve is only strengthened when I see a return to old practices at some of the very firms fighting reform; and when I see soaring profits and obscene bonuses at some of the very firms claiming that they can't lend more to small business, they can't keep credit card rates low, they can't pay a fee to refund taxpayers for the bailout without passing on the cost to shareholders or customers -- that's the claims they're making. It's exactly this kind of irresponsibility that makes clear reform is necessary."

The message hit its desired target. Poor Larry Kudlow of CNBC came very close to suffering an embolism on the air as he railed against the unjustness of the president's proposal. His capitalist comrades on Wall Street were just as shaken up with the Dow finishing the day down more than 213 points.

But after months of getting nowhere with the bankers and their powerful lobbyists - capped off by this prime time buck-passing earlier this month by Wall Street's most powerful CEOs - this slow-to-anger president has had enough. Easy to understand why his mood is not so great these days, what with the setback to his healthcare plans - let alone the rest of his agenda - now that the Democrats no longer can block a Republican veto in the United States Senate. Considering what most of the country thinks about bankers these days, here was chance to score easy points by taking on evil-doers in wing tips.

He wasn't done. When the Supreme Court ruled against limits on campaign contributions by corporations and unions, Obama again struck an irritated pose. In a statement sent out under his imprimatur, the president said the (conservative-controlled )court had "given a green light to a new stampede of special interest money in our politics."

Whoever is writing the president's speeches these days did a great job of studying (and ripping off) the tea baggers' own rhetoric by painting this as struggle pitting the little guy-versus big, powerful interests. Again, Mr. Obama:

"It is a major victory for big oil, Wall Street banks, health insurance companies and the other powerful interests that marshal their power every day in Washington to drown out the voices of everyday Americans. This ruling gives the special interests and their lobbyists even more power in Washington--while undermining the influence of average Americans who make small contributions to support their preferred candidates."

Maybe this is what the public wants to see. Taking the measure of the zeitgeist is always a fool's errand, but right now Barack Obama oversees a very pissed off nation. Frankly, there's some play-acting going on. By temperament, the man is not a populist. But if he keeps this up, it could prove to be smart politics. At the very least, I suppose, it won't give the 4th Estate further reason to speculate whether this president has a political identity.