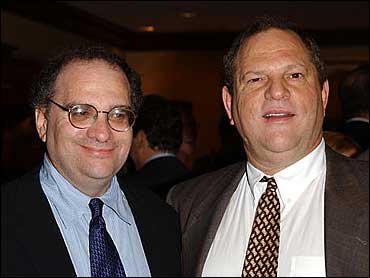 LOS ANGELES -- The brother of disgraced movie mogul Harvey Weinstein and co-founder of the company that now finds itself in crisis says he's in "a waking nightmare" and had no idea "the type of predator" his brother is accused of being.

"I want him to get the justice he deserves," Bob Weinstein said.

Bob, 62, operated in the shadow of his much more public and flamboyant older brother for more than 30 years as they partnered in Miramax and, more recently, The Weinstein Co. But in an interview published Saturday by The Hollywood Reporter, he said that he and Harvey, 65, have barely spoken in five years. The brothers ran separate divisions of their company, from opposite coasts -- Bob in Los Angeles, Harvey in New York.

"The members of the board, including myself, did not know the extent of my brother's actions," Weinstein said in the interview. He said he knew his brother was unfaithful to wife Georgina Chapman, "philandering with every woman he could meet." But he insisted he had no idea his brother was allegedly committing acts of sexual harassment and assault.

"I'll tell you what I did know: Harvey was a bully, Harvey was arrogant, he treated people like (crap) all the time," Bob said.

"I'm mortified and disgusted by my brother's actions. And I am sick for the victims. And I feel for them."

Dozens of women, including actresses Angelina Jolie and Gwyneth Paltrow, have gone public with accusations against Harvey following recent reports by The New York Times and The New Yorker detailing misconduct claims by others.

In the latest development, British actress Lysette Anthony said she's told police that Harvey raped her in the 1980s.

Anthony, who currently appears in the British soap opera "Hollyoaks," told the Sunday Times newspaper that Weinstein attacked her after showing up at her London home. She said she was left feeling "disgusted and embarrassed."

It was reported this week that London police were investigating a rape allegation against the producer relating to an incident in the '80s. The city's Metropolitan Police confirmed their investigation without identifying Weinstein by name.

Weinstein has denied any nonconsensual sexual conduct with any women.

A week ago he was fired from The Weinstein Co., which will now undergo a name change as it struggles to survive the current scandal.

Despite widespread predictions that the company will be forced to shut down or be sold, Bob Weinstein says, "There is a plan to come out on the other side."

Meanwhile on Saturday, Harvey Weinstein was expelled from the Academy of Motion Picture Arts and Sciences, the academy's board of governors said in a statement Saturday.

The board met Saturday to discuss the sexual abuse allegations against Weinstein. The board said it voted "well in excess of the required two-thirds majority" to immediately expel Weinstein from the Academy.

"We do so not simply to separate ourselves from someone who does not merit the respect of his colleagues but also to send a message that the era of willful ignorance and shameful complicity in sexually predatory behavior and workplace harassment in our industry is over," the statement said.