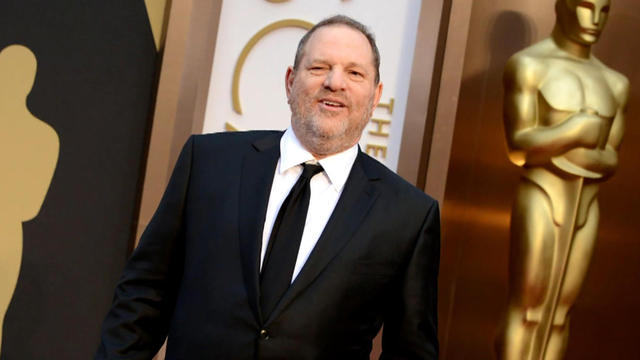 Hours later, Weinstein told a gaggle of paparazzi that he was hoping for a "second chance," and was "being good" as he got into a vehicle.

Facing allegations of sexual assault, Weinstein told reporters: "I gotta get help, guys. You know what, we all make mistakes. Second chance, I hope."

But the embattled movie mogul took a defiant tone with a jab at other Hollywood stars.

Earlier on Wednesday, Manhattan District Attorney Cyrus Vance Jr. said he declined to prosecute Weinstein in 2015 on a recommendation from the sex crimes unit of the New York Police Department.

In March of that year, actress Ambra Battilana Gutierrez told the NYPD that Weinstein had groped her.

Gutierrez wore a wire, and recorded a conversation with Weinstein the following day:

GUTIERREZ: Why yesterday you touch my breast?

WEINSTEIN: Oh, please, I'm sorry. Just come on in, I'm used to that. Come on. Please.

GUTIERREZ: You're used to that?

The audio was published this week as part of an exposé in The New Yorker.

On Wednesday, Vance promised to investigate any new claims against Weinstein, encouraging "additional victims to contact the office."

Actress and model Cara Delevingne said Weinstein made sexual advances during a meeting, trying "kiss me on the lips."

Actress Lea Seydoux charged that Weinstein, "suddenly jumped on me and tried to kiss me."

Weinstein has hosted numerous Democratic fundraisers over the years. Hillary Clinton said on Wednesday that she would give any money her campaigns received directly from Weinstein to charity.

"This was a different side of a person who I and many others had known in the past," Clinton said.

John Grisham on "A Time to Kill" sequel