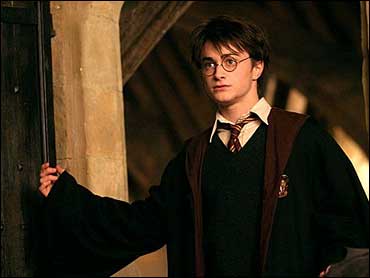 The boy wizard held off an interstellar fugitive, robotic wives and a talking cat to maintain his sway at movie theaters.

"Harry Potter and the Prisoner of Azkaban" was the top movie for a second weekend, taking in $35.1 million to lift its 10-day total to $158.1 million, according to studio estimates Sunday.

In its fourth weekend, "Shrek 2" held up well, slipping from second to third place with $24 million and pushing its domestic haul to $354 million. "Shrek 2" became the top-grossing animated movie ever, passing the $339.7 million gross of "Finding Nemo."

The sci-fi saga "The Chronicles of Riddick," with Vin Diesel returning as the escaped killer turned anti-hero from 2000's "Pitch Black," debuted at No. 2 with $24.6 million.

Nicole Kidman's "The Stepford Wives," a black comedy remake of the 1970s thriller about a town where men have replaced their mates with Barbie doll robots, opened in fourth place with $22.2 million.

"Garfield: The Movie," featuring Bill Murray as mouthpiece for the comic strip fat cat, premiered at No. 5 with $21.7 million.

For 2002's "Harry Potter and the Chamber of Secrets," revenues fell 52 percent in its second weekend, though that movie opened in November. "Prisoner of Azkaban" was the first "Harry Potter" movie to open in summer, when competition is stronger.

"I'm sure we'll settle in over the next several weeks," Fellman said. "We're in good shape, even though we took a pretty good drop this weekend."

The movie's 10-day total still is almost $10 million ahead of "Chamber of Secrets," which had taken in $148.4 million by that time.

The new movies offered choices for all audiences, with "Chronicles of Riddick" playing to male action fans, "Stepford Wives" proving popular with women and "Garfield" grabbing the family crowd.

"This is what summer's all about. There's a variety of movies with pretty much every genre represented, and the audience found the movie they wanted," Dergarabedian said.

In limited release, the Sundance Film Festival favorite "Napoleon Dynamite" opened strongly with $117,148 in six theaters. The comedy features a cast of unknowns in a tale of high school geeks finding their place in the world. It expands gradually to more theaters through late July.

Next weekend brings Steven Spielberg's comedy "The Terminal," starring Tom Hanks as an Eastern European stuck at Kennedy airport after a coup in his homeland invalidates his passport; a new rendition of Jules Verne's "Around the World in 80 Days," with Jackie Chan; and Ben Stiller's sports farce "Dodgeball: A True Underdog Story." And swooping in June 30 is the year's most anticipated movie, "Spider-Man 2."