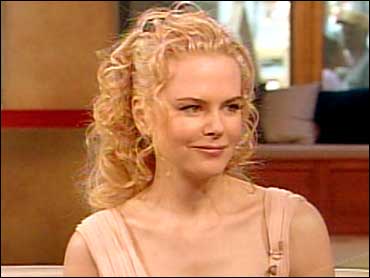 When it comes to acting, it seems there isn't anything that Nicole Kidman can't do. She has gained great acclaim for a musical, thrillers, and many dramas.

This week, she focuses on comedy as a woman who leaves the pressures of corporate life and moves to a very strange suburban town in "The Stepford Wives." The film is a remake of the 1975 motion picture thriller based on Ira Levin's best-selling book.

Kidman tells The Early Show co-anchor Harry Smith, "When I was cast in it, though I hadn't seen the film, I knew what a Stepford wife was."

The whole premise of the movie portrays the men's vision of women as being more compliant and submissive. Asked if in her personal life there is a domestic side to her, she says with a smile, "Yeah, I've worn aprons. I can cook up a few dishes. Flip a few pancakes."

As Joanna Eberhart, Kidman is a powerful executive who has on the surface a perfect life until she gets fired and her marriage shows signs of trouble. Being forced to re-examine her priorities, she and husband Walter (Matthew Broderick) pack up the family and make a fresh start in the idyllic suburban paradise of Stepford, Conn.

It is there that she meets characters played by Bette Midler, Christopher Walken, Faith Hill and Glenn Close and learns that to err is human.

Kidman says that after playing such dark parts as Virginia Woolf, in "The Hours," and Ada Monroe in "Cold Mountain," she was ready to do some comedy.

She says, "When the producer and the director were casting the movie, they said, 'We want what you did in 'To Die For.' I said, 'I can't remember how I did that, but I'll try.'"

Producers Scott Rudin and Donald De Line, director Frank Oz and screenwriter Paul Rudnick recognized its potential to become, as Rudnick puts it, "a real modern American comedy." Although both the novel and original movie were considered a response to the first wave of feminism in America during the 1970s, they all acknowledge that social changes during the last 30 years inspired some added twists in the story.

Kidman notes, "I love the way Paul Rudnick mixes politics and pop culture, and of course, Frank Oz is so adept with this sort of material, I knew he could guide me into new comedic territory."

Kidman will see the movie Thursday night with her sister. She says, "She's come all the way from Australia."

As for her love life, she says, "I have my kids. I have a lot of love."
Next for Kidman are "Bewitched," with Will Ferrell and "The Producers" in which she plays Ulla. "I'm excited about that," she says. "I get to sing and dance again."

Other projects are "Emma's War" and "American Darlings."