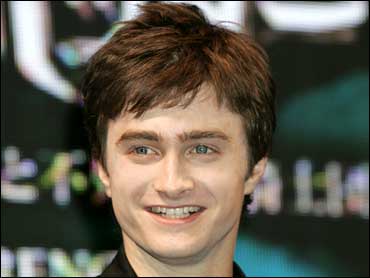 First kisses can be tricky. Even for Harry Potter.

Daniel Radcliffe — the star of the Harry Potter series — said Friday while in Tokyo for the premiere of the latest installment that it took a few takes to get over the nerves of getting the young wizard through his first on-screen kiss.

And even then, he didn't really feel the magic.

"When we started it, we were both a bit nervous," Radcliffe said at a news conference. "But after the first few takes, it was sort of like any other scene, which is never really what people want to hear. It doesn't really feel any different, because you are still acting."

In "Harry Potter and the Order of the Phoenix," the latest in the megahit series based on J.K. Rowling's books, Harry comes of age and has his first on-screen kiss with longtime crush Cho Chang, played by Katie Leung.

It was a big moment for Harry — if not for Radcliffe.

Producer David Heyman said director David Yates cleared the set to create more intimacy for the scene and the crew crowded around a monitor to watch.

"The makeup artist, who's known Daniel really well from the age of 10, she shed a tear," Heyman said. "For me, it was quite moving."

"Order of the Phoenix," a Warner Bros. Pictures release, opens in the United States on July 11 and in Britain the next day.

Radcliffe said Japan was a natural place for the world premiere — probably half of their fan mail comes from Japan, he said, and the hundreds of thousands of letters they receive are "beautifully presented."

The next Harry-related frenzy will be the publication of the seventh and final book, "Harry Potter and the Deathly Hallows," on July 21.

The first Harry Potter movie was released in 2001. Radcliffe and co-stars Emma Watson and Rupert Grint, who play Harry's friends Hermione Granger and Ron Weasley, have been at the center of the Potter storm for almost half their lives.

All three stars have signed up for the final two Potter films.