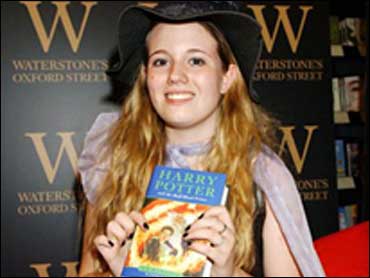 At last! Faster than a turbo-powered broomstick, Harry Potter has started flying off the shelves.

Bookstores across Britain flung open their doors at a minute past midnight Saturday to admit hordes of would-be witches, warlocks and ordinary muggles — Potter-speak for non-magical humans — eager to get their hands on "Harry Potter and the Half-Blood Prince," the sixth installment of the boy wizard's adventures. Shops as far afield as Singapore and Australia put the book on sale at the same time.

Potter fans rushed to tills to purchase the book and savor its opening words: "It was nearing midnight and the prime minister was sitting alone in his office." Many planned to stay up all night reading the 607-page tome.

"I'm going to read it all at once. I don't think I could stop once I got started," said Katrine Skovgaard, 18, who traveled from Denmark and waited in line for six hours at a central London bookstore.

In Edinburgh, Scotland, author J.K. Rowling emerged from behind a secret panel inside the city's medieval castle to read an excerpt from the sixth chapter to a spellbound group of 70 children from around the world.

Millions of Harry's fans around the globe can now solve the mysteries that have been teasingly hinted at by Rowling for months: Will Harry's teenage friends Ron and Hermione find romance? Which major character will die? Who is the half-blood prince?

"You get a lot of answers in this book," Rowling said as she arrived at the castle. "I can't wait for everyone to read it."

Some fans may be thrilled, and others shocked, by the book's many plot twists, which include the death of a beloved central figure, shifting affections among the three main characters — Harry, Ron and Hermione — and a new relationship for Harry.

Pottermania has become publishing's most lucrative, frantic and joyous ritual: hundreds of British bookstores held midnight openings to sell copies of the sixth installment of the boy wizard's adventures. North American stores were due to follow at midnight EDT, with many holding readings, parties and performances for the impatient hordes.

"We've been waiting so long, the idea of waiting one minute longer than necessary to get it is dreadful," said 15-year-old Potter fan Sinead Miller, who lined up outside a London bookstore at 6:30 a.m. Friday along with seven friends.

U.S. publisher Scholastic is releasing more than 10 million copies of "Half-Blood Prince." More than 1.4 million copies have been ordered through online retailer Amazon, and British bookstore chain Waterstone's predicts 2 million copies will be sold in Britain and 10 million worldwide in the first 24 hours.

Launch events were being held from Manhattan — where Barnes & Noble is holding a "Midnight Magic" party at its Union Square store — to Mexico City, where the Libreria Gandhi book store scheduled a midnight sale and a daylong Potter festival on Saturday, even though the book will be available only in English.

In Australia, where the book went on sale at 9:01 a.m. Saturday, 17-year-old Mohammed Jalili-Baleh spent the night on a chilly sidewalk to be first in line outside one of Syndey's largest bookstores. He ordered his copy of the book about six months ago, but wanted to be among the first to know what happens next.

"I'm an obsessed fan," he said of the popular series. "They grip you. When you read one sentence, you don't want to put it down."

In the United States, summer camps were planning midnight wake-up calls and waiving package restrictions in anticipation of "Half-Blood Prince," the penultimate of Rowling's planned seven-book series. One camp in New Hampshire even planned to forklift books to kids.

In the hours before midnight, hundreds of people lined up outside a branch of Waterstone's bookstore in London's busy Oxford Street. Many came dressed in homemade witch and wizard costumes. Some read Harry Potter books to pass the time, or played card games using Harry Potter decks.

"The atmosphere is amazing," said Rose-Marie De Koning, 19, who came from Roosendaal in the Netherlands for the event. "There are a lot of fans here and lots of new friends being made. London is Harry Potter town."

In Edinburgh, 39-year-old Rowling bewitched 70 lucky young fans with a midnight reading inside the city's 11th-century castle. The youngsters, who won competitions to report on the book launch for their local newspapers, were ferried in 12 carriages — each drawn by horses adorned with black ostrich plumes and driven by caped coachmen — up the cobblestone streets leading to the imposing medieval castle perched over the town's old quarter.

Since Rowling — then a struggling single mother and aspiring writer — introduced Harry and his fellow students at Hogwarts School of Witchcraft and Wizardry to the world in 1997, the books have become a global phenomenon, selling 270 million copies in 62 languages and spawning a series of Hollywood films. Rowling is now the richest woman in Britain, with a fortune estimated by Forbes magazine at US$1 billion.

Publication has sparked a now-traditional price war, with many chain retailers selling the book for about half the $29.95 cover price.

"We reckon it's going to be the biggest, fastest-selling book in history," said John Webb, children's buyer at Waterstone's, which said 300,000 people attended midnight openings at more than 100 stores across Britain. Stores provided jugglers, fire-eaters, magicians and face-painters to entertain waiting fans eager to solve the hinted-at plot mysteries

In London, events were muted by the July 7 subway and bus bombings, which killed more than 50 people. Book and magazine chain WH Smith announced it was scrapping a planned midnight launch at King's Cross Station, from whose fictional Platform 9 3/4 Harry catches the train to Hogwarts at the start of each term. At least 26 people died in a bomb blast on a subway near King's Cross, the deadliest of the day's four attacks.

WH Smith spokeswoman Sarah Hodson said it would be "insensitive and inappropriate" to hold the event at the station. She said the store at King's Cross — now swarming with uniformed police and wary commuters — would remain open into Saturday morning so fans could purchase the book.

Some commentators have suggested the Potter magic may be waning. But that's not how fans in London saw it.

Hanadee Kahn, 15, said she had read and reread all the books and remained "full-out obsessed" with Rowling's creation.

"She makes me believe in another world that doesn't exist but makes you wish you were there," Kahn said. "It's magical."