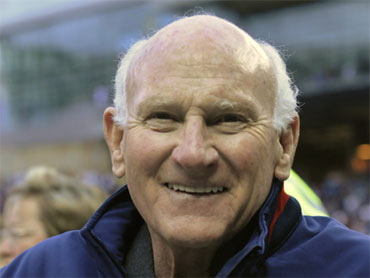 MINNEAPOLIS — Hall of Fame slugger Harmon Killebrew has been diagnosed with esophageal cancer.

The 74-year-old Killebrew released a statement through the Minnesota Twins on Thursday, saying he expects to make a full recovery from the "very serious" condition.

"With my wife, Nita, by my side, I have begun preparing for what is perhaps the most difficult battle of my life," Killebrew said.

Killebrew hit 573 home runs and made 11 All-Star appearances during his 22-year career spent mostly with the Washington Senators and Twins. He was inducted into the Hall of Fame in 1984 and was fifth on the career home run list when he retired in 1975 after one season with the Kansas City Royals.

Killebrew currently ranks 11th on the homer list, and his eight seasons with 40 or more homers still is tied for second in league history to Babe Ruth.

Killebrew has maintained a regular presence with the Twins for years. He now lives in the Phoenix area and said he is receiving treatment at the Mayo Clinic nearby. He was optimistic about his chances for recovery.

"The Mayo Clinic is one of the largest and most experienced medical centers treating esophageal cancer in the world. In the past decade, they have made tremendous advances in the treatment of this disease," he said. "Nita and I feel blessed to have access to the best doctors and medical care."

The congenial heavy hitter is one of the most beloved players in Twins history, as much for his gentle and approachable nature off the field as for the towering home runs he hit during his playing days.

"I speak very highly of Jim Thome," Killebrew said in September. "Not only is he a great player, but he's a great individual. I think he was a little apprehensive about passing me up. I said, 'Jim, I passed a lot of guys up myself along the way. I hope you hit 100 more."'

Killebrew's No. 3 jersey is retired, and he made several appearances at the Twins' new outdoor ballpark last season, including during their playoff series against the Yankees.

He is one of the biggest draws at the team's annual Twins Fest, a fan festival in January that serves as a buildup to spring training.

"I thank everyone for their outpouring of prayers, compassion and concern," he said. "Nita and I ask for privacy during this difficult journey."