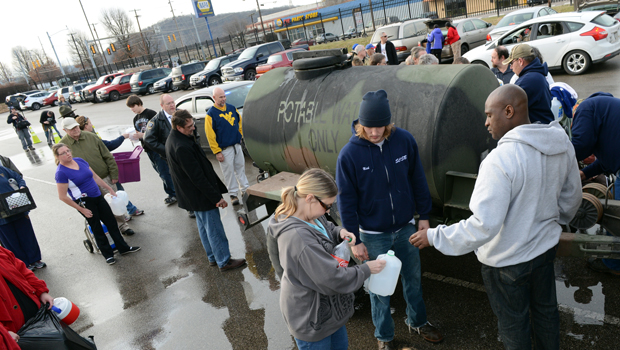 CHARLESTON, W.Va. -- A handful of people have been hospitalized and several hundred thousand remain without water after a chemical leaked from a storage tank in Charleston into the public water treatment system, state authorities said Saturday.

About 300,000 people in nine counties entered their third day Saturday without being able to drink tap water or use it to bathe or wash dishes or clothes after a foaming agent escaped the Freedom Industries plant and seeped into the Elk River. The only allowed use of the water was for flushing toilets.

Allison Adler of the Department of Health and Human Resources says 32 people sought treatment at area hospitals for symptoms like nausea and vomiting. Of those, four people were admitted to the Charleston Area Medical Center. Their conditions were not immediately known.

Federal authorities, including the Occupational Safety and Health Administration, or OSHA, opened an investigation into Wednesday's spill. Just how much of the chemical leaked into the river was not yet known.

The company's president issued an apology to West Virginia residents.

"We'd like to start by sincerely apologizing to the people in the affected counties of West Virginia," company President Gary Southern said. "Our friends and our neighbors, this incident is extremely unfortunate, unanticipated and we are very, very sorry for the disruptions to everybody's daily life this incident has caused."

Some residents, including John Bonham of Cross Lanes, were willing to accept Southern's apology.

"Yeah, I understand that stuff can happen," said Bonham, who also works in the chemical industry. "I don't think it's going to get him out of legal liability. OSHA is the one they're going to have to answer to."

Officials are working with a Tennessee company that makes the chemical to determine how much can be in the water without it posing harm to residents, said Jeff McIntyre, president of West Virginia American Water.

"We don't know that the water's not safe. But I can't say that it is safe," McIntyre said Friday.

For now, there is no way to treat the tainted water aside from flushing the system. That process is expected to take several days but the timeline could be affected by geographic location, customer demand and other factors, West Virginia American Water said Saturday.

The company said it will not lift a "do not use" order for tap water until results of water samples taken at the treatment plant consistently show that the chemical's presence in the system is at or below a federally recommended level of 1 part per million.

"Even when water produced by the plant meets acceptable health levels, extensive testing must be conducted in the distribution system before the 'do not use' order is lifted," the company said.

The leak was discovered Thursday morning from the bottom of a storage tank. Southern said the company worked all day and through the night to remove the chemical from the site and take it elsewhere.

"We have mitigated the risk, we believe, in terms of further material leaving this facility," Southern said. He said the company didn't know how much had leaked.

The tank that leaked holds at least 40,000 gallons, said state Department of Environmental Protection spokesman Tom Aluise, although officials believe no more than 5,000 gallons leaked from the tank. Some of that was contained before escaping into the river, Aluise said.

The primary component in the foaming agent that leaked is the chemical 4-methylcyclohexane methanol. The spill has forced businesses, restaurants and schools to shut down and forced the Legislature to cancel its business for the day.

Health officials in Kanawha and Putnam counties were working to reopen restaurants, daycare centers and other facilities closed by the spill. Several facilities were inspected on Saturday after health officials approved their plans to provide water for drinking, cooking and other activities.

"We will work around the clock, 24-7, and try to open ... as many businesses as possible in the next couple of days," said Dr. Rahul Gupta, health officer for the Kanawha-Charleston and Putnam County boards of health.

By Saturday morning, FEMA said it had delivered about 50 truckloads of water, or a million liters, to West Virginia.

The water was being distributed to residents at volunteer fire departments, community centers and other sites. No problems were reported at the sites, county emergency officials said.

"Like most things that happen, we're into it enough now that everybody's ready for it to be over," he said.

At a Kroger near a DuPont plant along the Kanawha River, customers learned the grocery store had been out since early Friday.

Robert Stiver was unable to find water at that and at least a dozen other stores in the area and worried about how he'd make sure his cats had drinkable water.

"I'm lucky. I can get out and look for water. But what about the elderly? They can't get out. They need someone to help them," he said.

The spill, occurring during flu season, has raised concerns that cases could increase because residents can't use tap water to wash their hands, Gupta said.