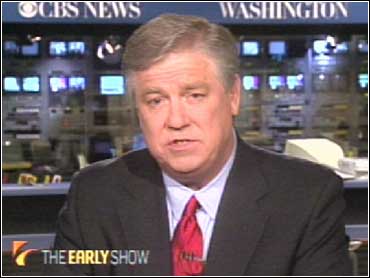 Former Republican National Committee Chairman Haley Barbour has the answers to your questions. In 1994 as Chairman Barbour helped the G.O.P. win control of both the House and Senate for the first time in forty years. Veteran CBS News White House Correspondent Bill Plante brings a top political expert into the Smoke-Filled Room each week to answer your questions.

Plante: Our first viewer Lynn C. asks “What are your thoughts on Dick Cheney being selected as George W. Bush’s running mate?”

Barbour: I think it’s a tremendous choice. I think there’s two reasons we’ll look back on this and see how important it was. One is that it shows Bush’s commitment is to governing. Dick Cheney will be the best partner in governing you’ve ever seen. He’s not a flashy campaigner, and he doesn’t bring any electoral votes. But Bush thinks governing is more important than politics. I think that the country is ready, after eight years of a perpetual campaign under Clinton and Gore, for somebody to put substance in front of spin, somebody who puts policy in front of politics. I think it’s a big statement by Bush.

The other thing is that it just reinforces Bush’s commitment to a bipartisan approach to governing in Washington. The American people are sick of the poisonous atmosphere and the bitter partisanship they’ve seen the last eight years in Washington. Bush has a great record of bipartisan governing in Texas. In fact the Democrat legislature passed his program in his first term.

Cheney is so popular and well received on both sides of the aisle that he will be a huge asset in Bush’s approach to Washington being bipartisan. The public deserves this. People are sick of this, and they ought to be.

Barbour: I think he had virtually no influence. Remember, the first President to pick Dick Cheney to be his White House Chief of Staff was Gerald Ford. Then Republicans in Congress picked Dick Cheney to be their number two leader and he was definitely lined up to be the leader and ultimately, the Speaker of the House under the Republicans. George H.W. Bush picked him after John Tower’s nomination cratered. It’s not unusual for the leading Republicans in the country to turn to Dick Cheney. I think Governor George Bush came to the same conclusion that Gerald Ford, House Republicans and his dad had come to.

Plante: M. Barrywrites “I am very concerned that Al Gore has stolen a lot of the momentum from .W. Is that what you are seeing in the polls? If so, how will GW respond?”

Barbour: The Gallop Poll that was published today shows Bush up by eleven points – that’s about as big a lead as he’s ever had. He had some polls last month that showed him up ten, eleven, twelve points. But the truth is, this race is going to get closer. Gore doesn’t even have the Democrat base yet – he will ultimately get that. This will be a close election. I am frankly surprised that Bush continues to enjoy these kinds of leads when you see the kind of money the Democrats have spent on television in the last few weeks, and Gore has been on the attack steadily. So far it hasn’t really eaten into Bush’s lead at all. But ultimately it’s going to be a close race.

Plante: ”How big an issue is abortion going to be during the election?” asks J.C.Q.

Barbour: I don’t think it will be a particularly big issue. The choices are very clear here. Bush is pro-life and Gore’s pro-abortion. I think more people in the country want a responsible policy toward abortion than the policy that Gore has, which is so pro-abortion that he’s for abortion on demand, for any reason or no reason, at any time in the pregnancy – right up until the ninth month, without any limitation or restriction whatsoever and paid for the by the taxpayers if necessary. Albert Gore has never seen or heard about an abortion that he would oppose. The American people don’t want that.

Plante: Darlene Brainard writes “I am getting right down worried about this election. The Republicans can't seem to even whisper a counter to Al Gore's harsh attacks on Bush and Cheney. The Democrats seem to have so many come out with loud, shrill voices that really articulate their negative feelings and arouse the same feelings in others. Where are the people in the Republican Party who could generate some excitement and enthusiasm for the ticket? I am afraid G.W. is getting too complacent and feels that he doesn't have to respond to these vicious attacks. Why can't he throw some negatives back their way?”

Bush’s message is optimistic, positive and bipartisan. That’s a breath of fresh air to the American people. The American people know we can do better than we’ve been doing with this poisonous atmosphere in Washington. I think they see the difference when Gore is always attacking and Bush is saying here are the things we can do better for America, our communities and our families.

Plante: ”How can the Republicans make character an issue when most of the finger pointers during the impeachment had no stronger character than the President?” “Shalafata” wants to know.

Barbour: In the Presidential campaign the public is going to decide about the personal characteristics of the candidates. The Presidency is the most personal office in the world. I mean, he’s in your den every night. A lot of the weight in voting goes to the personal characteristics. Bush’s positive, optimistic, warm, and in fact regular, kind of personality has been one of the reasons he’s enjoyed these leads in the polls. And Gore’s negative campaign, candidly, is going to make it a lot harder for the people to warm to him.

Plante: Jon Damascus comments that “Candidate Gore talks about all the prosperity that has occurred under President Clinton during the two terms they have held the White House.” He asks, “If the Democrats ran the House and Senate, with a majority for approximately 43 years, and the Republicans the last eight, shouldn’t the Republicans really get the credit for the booming economy?

Barbour: Interestingly, among the Americans who give government much credit for economic growth, most give the biggest share to Alan Greenspan, who is a Republican appointed by a Republicn. But when you get down to who’s more responsible – President Clinton or the Republican Congress – the American people split about even. But I think, most importantly, most Americans don’t think it’s the government who’s responsible – period. They see it’s the private sector. Technology. The things that have happened in our economy, they don’t see as being driven by government. I think that’s very healthy. And I think it’s one of the reasons Gore doesn’t get much credit. The other reason is a lot of people in the country think the economy is good despite Clinton and Gore, rather than because of them.

Plante: ”Under your leadership the RNC broke all previous fundraising records. And new records have been set in this campaign by both parties.” writes Julie. She is curious about “your thoughts on campaign finance reform?”

Plante: ”Are conventions an anachronism that turn regular people off on politics? Why do American campaigns last so long?” asks R.M.

Barbour: The conventions no longer have a role in the selection of President and Vice President in either party. Their relationship to the Presidential campaign is that it’s a launch pad. It’s an opportunity for the American people to get a whole lot of information and a lot of chances to see our candidates and form impressions, images, to learn details and get a better feel for them.

But just because conventions have nothing to do with who our nominee will be, doesn’t mean they’re unimportant. It’s a chance where party’s write their platforms, that say to the American people, in broad terms, “This is where Republicans stand, this is what our party’s trying to do. We set our rules on how we’re going to run our party for the next four years, about how we’re going to select our nominee four years from now. And, finally because we do have a two party system, which is a national system, that’s really been great for America, it’s important that on a regular basis, large numers of party leaders from the different parts of the country come together, get to know each other, to network. Conventions serve all those purposes.

Campaigns last so long because the news media and the American people tolerate it. They do last too long. But you can’t legally stop them under our system of government. I would certainly be against any law that says “You can’t campaign when you want to.” Politicians have been trying to quell dissent and make people quit criticizing them since the Sedition Act of 1799. You’ve got some people in Congress today who want that want to make it against the law for them to get criticized by negative ads and all that. Appealing as that might be to the politicians who get criticized, the folks who do the criticizing have every right under our system of government. Political speech is the most fundamental speech in our form of government.

Plante: Our final viewer, Tom M. writes “Do you think John McCain’s appearance at the Shadow Convention Sunday night will hurt George W. and the Republican Party or will it hurt him?”

Barbour: I think the Shadow Convention is a goofy idea. However, maybe Senator McCain will go over there are talk good sense. And it’s never a mistake to talk good sense to any group, especially one that needs some good sense talked to them.