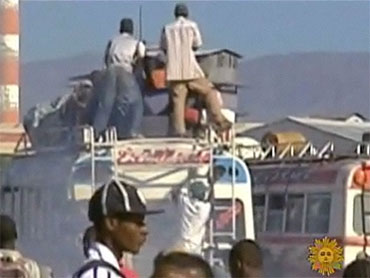 Only 1 cent of each dollar the U.S. is spending on earthquake relief in Haiti is going in the form of cash to the Haitian government, according to an Associated Press review of relief efforts.

Less than two weeks after President Obama announced an initial $100 million for Haiti earthquake relief, U.S. government spending on the disaster has tripled to $317 million at latest count. That's just over $1 each from everyone in the United States.

Relief experts say it would be a mistake to send too much direct cash to the Haitian government, which is in disarray and has a history of failure and corruption.

"I really believe Americans are the most generous people who ever lived, but they want accountability," said Timothy R. Knight, a former US AID assistant director who spent 25 years distributing disaster aid. "In this situation they're being very deliberate not to just throw money at the situation but to analyze based on a clear assessment and make sure that money goes to the best place possible."

The AP review of federal budget spreadsheets, procurement reports and contract databases shows the vast majority of U.S. funds going to established and tested providers, who are getting everything from 40-cent pounds of pinto beans to a $3.4 million barge into the disaster zone.

"We are trying to respond as quickly as we can to this catastrophe of biblical proportions by mustering all of the resources that the United States government can bring to bear, first on rescue leading into relief, which is where we are right now, and hopefully seamlessly into recovery," said Lewis Lucke, U.S. special coordinator for relief and reconstruction.

Major relief efforts were launched within hours of the Jan. 12 earthquake that killed at least 150,000, devastated the capital of Port-au-Prince and affected a third of its 9 million people. Behind each effort has been cash and contracts, airline tickets to be purchased and ocean freighters to be leased.

Of each U.S. taxpayer dollar, 40 cents is going to the U.S. military, paying for security, search and rescue teams, and the Navy's hospital ship USNS Comfort.

Another 36 cents funds US AID's disaster assistance - everything from $5,000 generators to $35 hygiene kits with soap, toothbrushes and toothpaste for a family of five.

Just over a dime has already been spent on food: 122 million pounds of pinto beans, black beans, rice, corn soy blend and vegetable oil. When purchased in bulk, the actual food prices are relatively low. Pinto beans, for example, cost the U.S. government 40 cents a pound when purchased in 5 million-pound batches last week.

Getting the food to Haitians - paying for freighters, trucks and distribution centers, and the people to staff them, took another 10.5 cents from each dollar.

Initial disaster spending was aimed at saving lives; now the spending is shifting to recovery. The Obama administration wants to put about 1.5 cents of each dollar directly into Haitian quake survivors' hands by paying them to work. One program already in place describes paying 40,000 Haitians $3 per day for 20 days to clean up around hospitals and dig latrines. That project also includes renting 10 excavators and loaders, at $600 each, and 10 dump trucks at $50 a load.

One penny of each dollar is going straight to the shattered Haitian government, whose president is sleeping in a tent while struggling to organize an administration that was notoriously unstable even before the earthquake. A final half-cent funds three Dominican Republic hospitals near the Haitian border, where refugees have been begging for help.

The U.S. is providing the largest slice of a global response that totals more than $1 billion in government pledges. The European Union's 27 nations are contributing $575 million.

The U.S. also has long been the largest donor of ongoing foreign aid that Haiti depends on for up to 40 percent of its budget, with more than $260 million in U.S. money last year aimed at promoting stability, prosperity and democracy.

Private money also is flowing into Haiti - U.S. charities have raised $470 million for disaster relief, according to The Chronicle of Philanthropy, and the U.N. says total international giving - spent and pledged - has topped $2 billion.

The U.S. government funding flows through federal agencies that administer $2.6 billion already appropriated in the 2010 budget for foreign disaster relief, said Thomas Gavin, a spokesman at the White House Office of Management and Budget.

Gavin said there are no plans to ask Congress for more money.

"At this point, the costs incurred are well within the levels appropriated by Congress for emergency disaster assistance," he told the AP. "It's like your checking account, your family budget - you decide, 'OK, I'm going to spend "X" number of dollars on my groceries.' Well, we, as a country, set this money aside."