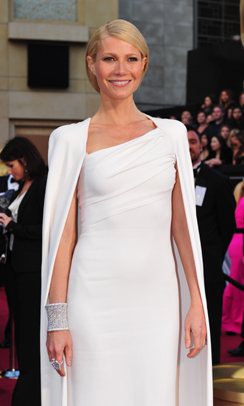 The magazine announced Wednesday that the Oscar winner has topped its annual best-dressed list.

Paltrow, 39, was chosen by People for her simple, elegant style that avoids fashion's quirkier trends, according to Reuters. The magazine's list was compiled by its 42 million readers, editors and fashion bloggers.

Paltrow's stylist, Elizabeth Saltzman, told People that the actress was not a slave to trends. "She doesn't do fringe. She has a uniform. It's simple, not overdone," Saltzman said.

Others who made this year's list include Emma Stone, chosen as the star with the best red carpet style, and Britain's Kate, Duchess of Cambridge, who was hailed as the woman with the best classic style.

Rihanna, who was praised for taking the most fashion risks, also made the cut, as did Jennifer Lawrence, who was named the best dressed star under 25.