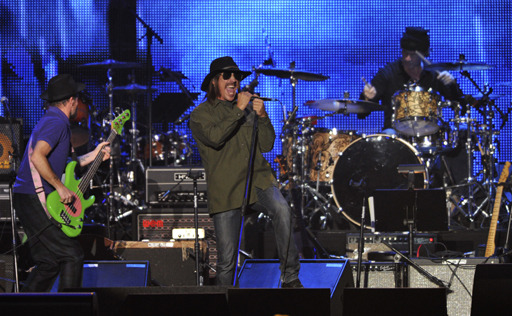 NEW YORK (CBS/AP) Rockers Guns N' Roses, Red Hot Chili Peppers and the Beastie Boys will be inducted into the Rock and Roll Hall of Fame at an April 14 ceremony in Cleveland.

Nyro, who wrote such hits as the 5th Dimension's "Wedding Bell Blues" and Blood Sweat & Tears' "When I Die," is the only female act to make it. The hall passed on Donna Summer, Joan Jett and the Blackhearts, Heart and Rufus with Chaka Khan, all of whom were on the ballot for 2012.

But it wasn't just women who were denied entry into the rock hall for next year: Voters also passed on hip-hop pioneers Eric B. & Rakim, War, the Cure and the Spinners.

Guns N' Roses blazed on the rock scene in 1987 with its official debut, "Appetite for Destruction." Fronted by Axl Rose, with Slash and Izzy Stradlin on guitars, Duff McKagan on bass and Steven Adler on drums, the group dominated music with its aggressive rock grooves, a counterpoint to the pop music of Madonna and Michael Jackson.

They were also defined by their dysfunction, gleefully embodying the mantra of sex, drugs and rock and roll, which finally led to the group's 1996 breakup.

The Red Hot Chili Peppers, fronted by Anthony Kiedis, with Flea on bass, drummer Chad Smith and guitarist Josh Klinghoffer, released its 10th album, "I'm With You," this year. The band, which has L.A. roots like Gins N' Roses, had its own troubles, though, with the drug-related death of guitarist Hillel Slovak and the departure of guitarist John Frusciante.

The Beastie Boys (Adam Yauch, Mike Diamond and Adam Horowitz) are among the pioneers of rap.

Both Stewart and Wood will become second-time members of the Rock Hall (Stewart was inducted as a solo artist in 1994 and Wood as part of the Rolling Stones in 1989) for the Small Faces/The Faces, a key rock group that developed as British invasion was peaking. Among their hits was the song "Stay With Me."

Donovan is best known for trippy hits like "Mellow Yellow."

Guns N' Roses and the Faces were inducted their first time on the ballot. The Red Hot Chili Peppers had to wait until their second try, and the Beastie Boys and Nyro were denied twice before.

As for a possible induction reunion performance in Cleveland next spring, Guns N' Roses' Adler told Rolling Stone the band owed it to its fans. "My fingers are crossed. My toes are crossed," he said.