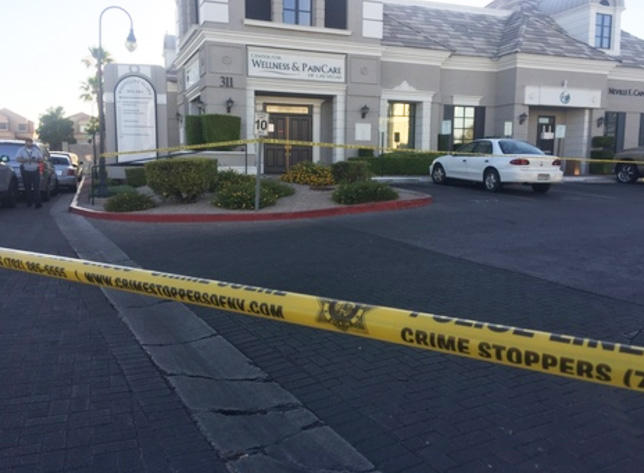 As other patients and staff fled, the man, who was a regular patient at the Center for Wellness and Pain Care, turned the gun on himself, police spokeswoman Laura Meltzer said. He died before police arrived.

CBS Las Vegas affiliate KLAS-TV reports Meltzer said things could have been much worse but, "Officers' response was very quick to this incident. Once we received those initial calls of possible shots fired, a possible active shooter, the very first officers that arrived formed a team and immediately went in to try and take care of the situation."

Bystander Michel Evans remarked to KLAS that, "It's really shocking how people could do something like that, you know?  For something so small."

Caitlyn Jones said she was one of about a dozen people in the clinic when the gunman opened fire just a few feet from her.

"I've never heard something that loud in my life," she told the Las Vegas Review-Journal . "He pointed the gun at me and I just ran."

One woman was injured when she fell down trying to get out of the clinic, Meltzer said. She was hospitalized, but her injuries were not serious.

According to its website, the clinic offers pain management via acupuncture, aromatherapy, massage therapy, and prayer.

Patient Sammy Alonge was in a treatment room when the gunfire began. He said the nurse who had been treating him was one of the shooting victims.

"When I heard the first gunshot, I thought it was a bottle or something on the floor, like something just popped," Alonge told the Review-Journal. "When I started hearing that 'pop, pop, pop,' I was so scared."

He tried and failed to break a window to get out, so he hid under a table as he heard at least eight shots ring out.

When the door opened moments later he thought it was the gunman coming for him, but it was a woman saying the shooter was dead and the crisis over.