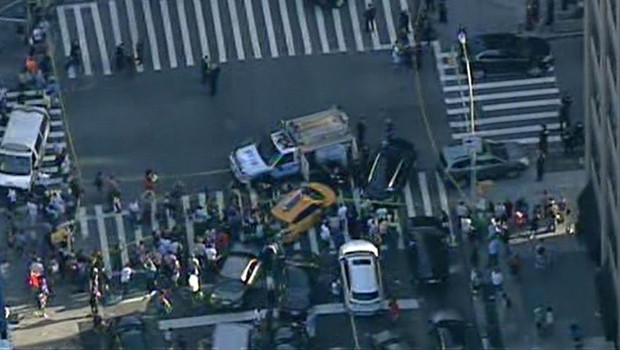 NEW YORK -- A man shot a security officer and then took his own life at a federal building in lower Manhattan on Friday, CBS New York reported.

The shooting happened just after 5 p.m. at the federal office building at 201 Varick St., near Houston St.

The 68-year-old suspect walked into the building and approached the metal detector at the security screening area, NYPD Chief of Department James O'Neill said. The suspect then pulled out a gun and shot the security guard in the head, officials said.

The suspect was pronounced dead at the scene. CBS New York reported he was identified as Kevin Downing, a veteran from Fort Lee, New Jersey.

The 53-year-old security guard was pronounced dead at 5:55 p.m. at a hospital, sources told CBS News.

The building was placed on lockdown and then evacuated following the shooting. The building houses a Department of Veterans Affairs office, a U.S. Post Office, The National Urban Security Technology Laboratory, an Immigration Court, and other offices.

The security guard was represented by Service Employees International Union Local 32BJ, which identified him as Idrisa Cammara.

"We are shocked and horrified at this terrible news and send our deepest condolences to Officer Camarra's family. Security officers around the city and country serve on the front line each and every day to keep us safe and secure. We are heartbroken that one of our own has fallen," the union said. "We hope some of our questions in the face of this terrible tragedy will be answered. For now, we are keeping Officer Camarra's family and loved ones in our thoughts and prayers."

The NYPD was working closely with the FBI, the Department of Homeland Security and other authorities to determine the suspect's motive, O'Neill said. He said there was no indication that the shooting was terrorism related.

There were no other suspects, and the building was secured as of just before 7 p.m.