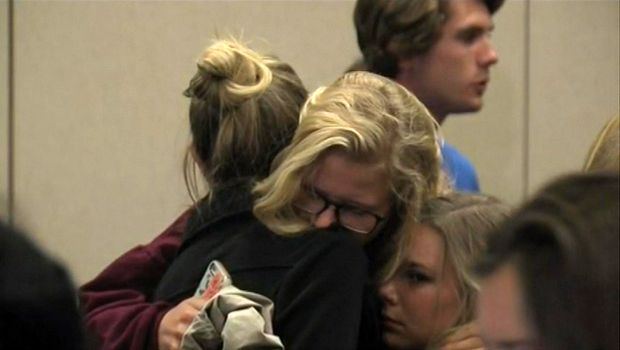 University police chief Gregory T. Fowler identified the shooter as 18-year-old Steven Jones and said he used a handgun in the 1:20 a.m. shootings. Jones faces an initial court appearance in Flagstaff Friday afternoon. Police would not say what led up to the fight.

Jones was arrested immediately after the shooting and faces one count of first-degree murder and three of aggravated assault.

The victims were all members of the Delta Chi fraternity, the organization said in a statement. The university identified the student who died as Colin Brough. The victims being treated at Flagstaff Medical Center are Nicholas Prato, Kyle Zientek and Nicholas Piring. The hospital said it couldn't release any information on conditions.

"This is not going to be a normal day at NAU," said school President Rita Cheng. "Our hearts are heavy."

She called it an isolated and unprecedented incident and said classes would go on as scheduled Friday.

The parking lot where the shooting happened is just outside Mountain View Hall dormitory on the Flagstaff campus, which provides housing for many of the campus' sororities and fraternities. The gate to the dorm's main entrance was closed Friday, and police had the surrounding area taped off.

A NAU sorority reacted to the shooting on Twitter.

Brough was from Castle Rock, Colorado, about 30 miles south of downtown Denver. He loved to play lacrosse and wanted to be successful so he could help other people, said his cousin, Ryan Jernegan of Woodbury, New Jersey.

"He was the happiest person that you probably would ever meet," Jernegan said.

The two men were close growing up and reunited during a chance meeting in Las Vegas in June.

"I just keep thinking how lucky I am to be able to spend those days with him," Jernegan said.

Randy Barber, a spokesman for Douglas County Schools, confirmed that Brough graduated from Castle View High School in 2013. He said the school district had activated a crisis team to support students and staff there.

He worked as a cashier at the Puma outlet store in Castle Rock during the summer after graduating high school. Manager Chauncey Musser remembered him as an outgoing employee with a seemingly bottomless supply of energy.

Alex McIntosh, a friend of Zientek, said he worked part time at the High Country Conference Center while attending the school full time.

"He's very calm, very respectful, has a great manner, calm demeanor and you'd never expect him to be caught up in something like this," McIntosh said.

Student Maria Gonzalez told The Associated Press that she at first suspected firecrackers when the shooting happened.

"I was studying for an exam so I looked out the window and see two people running, and that's when I realized they weren't fireworks they were actually gunshots," she said.

Arizona political leaders voiced support for the university and surrounding community, with Gov. Doug Ducey calling the shooting heartbreaking. He said the state stands ready to help in the investigation and response.

Rep. Ann Kirkpatrick, who lives in Flagstaff, expressed confidence that the city "will only grow stronger in difficult moments like these."

"My thoughts and prayers are with families of the person who was killed and the three others who were wounded in the horrific shooting," McCain said.

The Flagstaff shooting comes on the same day that President Obama visited Roseburg, Oregon, where eight students and a teacher were shot and killed last week at Umpqua Community College. The gunman in the Oregon shooting wounded nine others before turning the gun on himself.

NAU is a four-year public university that has more than 25,000 total undergraduate students at the campus in Flagstaff, a city about two hours north of Phoenix that is surrounded by mountains and ponderosa pines. The city of 70,000 people has a reputation for being a safe place and typically records only one murder per year.

"It's crazy. You don't think this stuff happens. When I think of Flagstaff, I think safety," said freshman Cameron Sands, who had pledged at a fraternity and was supposed to move into Mountain View Hall on Friday.