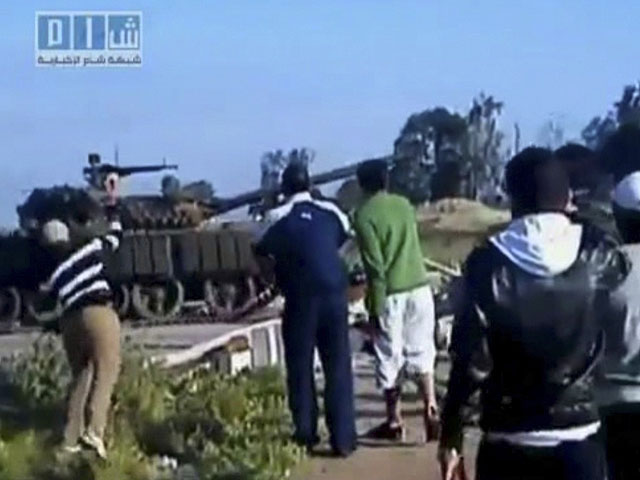 BEIRUT - Residents of the southern Syrian city of Daraa braved sniper fire Tuesday to pull the bullet-riddled bodies of the dead from the streets and hide them from security forces, a day after a brutal government crackdown on the popular revolt against President Bashar Assad, witnesses said.

As heavy gunfire reverberated through Daraa, a Syrian human rights group said authorities detained dozens of people across the country, mainly in several Damascus suburbs, including the town of Douma and in the northern coastal city of Jableh.

A relentless crackdown since mid-March has killed more than 400 people across Syria, with 120 dead over the weekend, rights groups said. That has only emboldened protesters who started their revolt with calls for modest reforms but are now increasingly demanding Assad's downfall.

The Syrian army, backed by tanks and snipers, launched a deadly raid on Daraa, where the uprising in Syria started more than a month ago. At least 22 people were killed in the southern city. Security forces also conducted raids in the towns of Douma and Jableh.

The White House has stepped up its condemnation of Assad's regime, but stopped well short of demanding his ouster. U.S. officials said Washington has begun drawing up targeted sanctions against him, his family and his inner circle to boost pressure on them to halt the repression.

"It's a question of geography," Plante said on CBS' "The Early Show." "Syria sits on a border with Israel and Jordan on one side and Iraq on the other. There's huge concern here about destabilizing Syria and what would happen if that were to take place. That's one reason you're not hearing calls from other Arab nations to intervene in Syria, the way we heard them when the uprising started in Libya.

"The only thing the U.S. has done is to move to consider further sanctions. There have been sanctions on Syria since 2004. The White House is now talking about putting new sanctions on members of the Assad family, travel bans and asset freezes. And they say they're doing this with a great sense of urgency. But at the moment, that's all they're doing.

Washington was conferring with European countries and the United Nations about options.

CBS News correspondent Barry Petersen reports that Assad's use of tanks Monday against his own people in Daraa also prompted a stern reaction from Britain.

British Foreign Secretary William Hague said Britain also was working with other members of the U.N. Security Council "to send a strong signal to the Syrian authorities that the eyes of the international community are on Syria." The U.N. will discuss Syria later Tuesday.

The United States told all its nonessential staff and the families of all its embassy workers to leave the country, but kept the facility open for limited services. It also advised all Americans to defer travel to Syria and advised those already in the country to leave. On Sunday, Britain urged its citizens to leave Syria.

The head of the Syrian Observatory for Human Rights, Rami Abdul-Rahman, who provided the death toll of more than 400 people since the uprising began last month, said that figure did not include those killed in the raids on Daraa and Douma, a Damascus suburb. It also did not include the number of Syrian troops killed, he added.

It took more than a day for residents of Daraa to start pulling many of the bodies off the streets of Daraa, with rooftop snipers and army forces firing on people who dared to leave their homes. One man, Zaher Ahmad Ayyash, was killed as he tried to retrieve the bodies of two brothers, Taysir and Yaser al-Akrad, said a resident, who asked to be identified only as Abdullah for fear of reprisal.

The corpses were hidden away after they were retrieved from the streets, Abdullah said, suggesting that residents might face reprisal if troops discovered they had taken the bodies. As he spoke on the phone, gunfire popped in the background.

"We can't bury the dead in the cemetery because it's occupied by Syrian soldiers," said Abdullah. "We are waiting to find another place to bury them."

Snipers also targeted water tanks on rooftops in Daraa - the last source of clean water for many desperate residents of the parched region of 300,000 people, Abdullah said.

Even as the military crackdown intensified, Abdullah said there was quiet, defiant resistance. He said some soldiers were disobeying orders and allowing residents to pass through military checkpoints.

Palestinian refugees - generally the most hardscrabble of all Syrian residents - smuggled flour, water, bread and canned food into town. "We are so grateful to them," the resident said.

Earlier in the day, another resident said Syrian special forces were in the streets of the impoverished city, and tanks had opened fire in the city.

"We are being subjected to a massacre," another resident screamed over the telephone above the sound of gunfire. "We have been without electricity for three days. We have no water."

The witness, contacted via a Jordanian cell phone, spoke on condition of anonymity for fear of reprisal, as did other witnesses and residents contacted across Syria.

Scenes similar to those in Daraa took place in Jableh, with residents hiding their dead from Friday's assault and then furtively burying them in private plots of farmland - some as late as Tuesday - out of fear that the families of those killed might be arrested, a resident said. Also like Daraa, gunmen had shot holes in water storage tanks on rooftops in a form of punishment, he added.

In a continuation of the crackdown, hundreds of people were arrested Tuesday, he said.

Syria has banned nearly all foreign media and restricted access to trouble spots since the uprising began, making it almost impossible to verify the dramatic events shaking one of the most authoritarian, anti-Western regimes in the Arab world.

In Douma, which saw an intense crackdown Monday, houses were raided again at dawn Tuesday, with forces detaining anyone suspected of participating in demonstrations. Soldiers at sandbagged checkpoints also held men deemed suspicious. Phone service was cut off, a resident said.

The streets of Douma were almost empty, with schools and most shops closed and uncollected garbage piling up. Security was heavy, with agents at checkpoints asking people for their identity cards.

Another resident said authorities closed the private Hamdan Hospital after ordering all families of patients there to take them home. No reason was given for the closure, and three doctors there were detained, the resident said.

In the seaside city of Banias, divided between Sunni Muslims and Alawites - the sect of the ruling Assad family and many key officials - about 5,000 people demonstrated peacefully in support of the citizens of Daraa, and there was no interference from security forces, activists said.

Life was almost back to normal in the central city of Homs, except for intense security, a witness said. A few hundred people demonstrated there Monday in support of Daraa, the witness said

Daraa has seen some of the worst bloodshed in the past five weeks as the uprising gained momentum. Recently, the city has absorbed many rural migrants who can no longer farm after years of drought.

The man said Syrian special forces were in the streets of the impoverished city near the border with Jordan. Tanks had opened fire in the city, he added.

The witness, contacted via a Jordanian cellphone, spoke on condition of anonymity for fear of reprisal, as did other witnesses and residents contacted across Syria.

Syria has banned nearly all foreign media and restricted access to trouble spots since the uprising began, making it almost impossible to verify the dramatic events shaking one of the most authoritarian, anti-Western regimes in the Arab world.

In Douma, which saw an intense raid Monday, a resident said authorities closed the private Hamdan Hospital after ordering all families of patients there to take them home. No reason was given for the closure and three doctors who worked there have been detained, the resident said.

The streets of Douma were almost empty Tuesday, with schools and most shops closed. There was an intense security presence, with agents at checkpoints asking people for their identity cards.

Garbage was piling up in Douma because sanitation crews have not worked for days due to the violence.

In the central city of Homs, life was almost back to normal -- except for intense security, a witness said. A few hundred people demonstrated in Homs on Monday in support of Daraa, the witness said

Daraa, located in a parched region of 300,000 people in the south, has seen some of the worst bloodshed in the past five weeks as the uprising gained momentum. Recently, the city has absorbed many rural migrants who can no longer farm after years of drought.

The uprising was touched off by the arrest of teenagers who scrawled anti-government graffiti on a wall.

Last week, Assad fulfilled a key demand of protesters by abolishing nearly 50-year-old emergency laws that had given the regime a free hand to arrest people without cause. But he coupled the concession with a stern warning that protesters would no longer have an excuse to hold mass protests, and any further unrest would be considered "sabotage."

When protesters defied his order and held demonstrations Friday -- the main day for protests around the Arab world -- they were met with a gunfire, tear gas and stun guns.

The attack on Daraa was by far the biggest in scope and firepower. Video purportedly shot by activists showed tanks rolling through streets and grassy fields with soldiers on foot jogging behind them.

State-run television quoted a military source as saying army units entered the city to bring security "answering the pleas for help by residents of Daraa."

Syria has a pivotal role in most of the flashpoint issues of the Middle East -- from the Arab-Israeli peace process to Iran's widening influence. Instability has thrown into disarray the U.S. push for engagement with Damascus, part of Washington's hopes to peel the country away from Hamas, Hezbollah and Tehran.