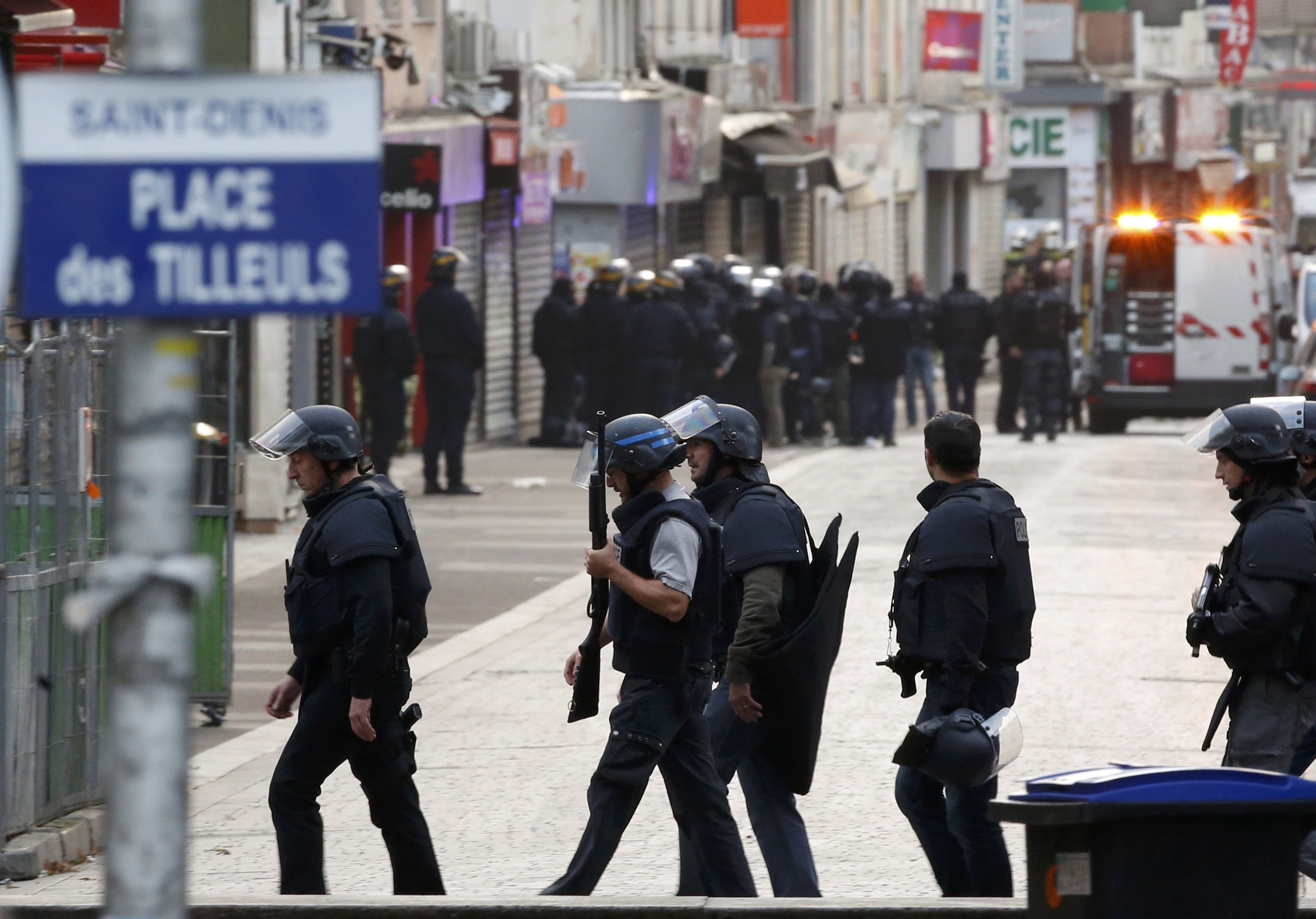 SAINT-DENIS, France -- A woman wearing an explosive suicide vest blew herself up and another person was killed as heavily armed police stromed a suburban Paris apartment where the suspected mastermind of last week's attacks on the French capital was believed to be holed up, police said Wednesday.

French Prosecutor Francois Molins said Wednesday a total of eight people were arrested in two separate police operations in Saint-Denis. He said the terrorist cell targeted there was "neutralized."

The main raid began in the early hours of the morning and went on for about seven hours. Three suspects were taken into custody inside the building and four others outside. Seven police officers were injured in the raid, although none of the injuries are believed to be serious.

A senior police official said he believed Abdelhamid Abaaoud, a Belgian Islamic State of Iraq and Syria (ISIS) militant believed to have planned the gruesome attack last week, was inside the apartment in the Paris suburb of Saint-Denis with five other heavily armed people. Abaaoud, a well-known ISIS operative suspected of planning several attacks inside Europe, was previously believed to have been in Syria.

Overnight raids by French police across France resulted in 25 arrests and the seizure of 34 weapons. The new tally was announced Wednesday by the Interior Ministry. In all, French police have carried out 414 raids and made 60 arrests while seizing 75 weapons since Friday. The captured armory includes 11 military-style firearms, 33 rifles and 31 handguns. In addition to dozens of arrests, 118 more people have been placed under house arrest in another of the new powers permitted under France's state of emergency.

The identities of the those killed and arrested in the Saint-Denis raids have not been released. Molins would only confirm that Abaaoud and the other suspected terrorist still at large, Salah Abdeslam, were not among those taken into custody. Speaking after the raid, French officials confirmed a second suspect, a man, was found dead inside the apartment with gun and grenade wounds.

Scores of police stormed the building and were met with unexpectedly violent resistance. Molins said 5,000 rounds were fired during the raid. At some point, the entire third floor of the building collapsed.

A man who says he lives in the apartment raided by French SWAT teams says he let some people stay there as a favor and "didn't know they're terrorists."

Jawad Bendaoud, who was detained during Wednesday's raid on suspects linked to last week's Paris attacks, spoke to BFMTV as he was being led away by police.

Speaking outside the building in the Paris suburb of Saint-Denis, he says "I learned it was at my place, and the individuals barricaded themselves in my place ...I didn't know they're terrorists."

He said someone had "asked me to put some people up for two, three days, and I provided this service."

He says "I don't know where they come from ... If I would have known, I wouldn't have let them stay."

Bendaoud's lawyer confirmed the man in the footage was his client, who was sentenced to eight years in prison for killing his best friend in a 2006 fight.

Media reports suggested as many as five police officers sustained injuries in the raid, and an officer in full tactical gear was seen leaving the apartment building with the help of colleagues, but he did not appear to be seriously hurt. A police SWAT team dog named Diesel was killed during the raid.

Police led a handcuffed man, nude from the waist down, out of the building in handcuffs hours after the raid began.

No hostages were being held, and with officials declaring the operation over at about 11:30 a.m. local time, it appeared no further suspects were still holed-up in the building.

"Then there was second big explosion. Then two more explosions. There was an hour of gunfire," said Baptiste Marie, a 26-year-old independent journalist who lives in the neighborhood.

Another witness, Amine Guizani, said he heard the sound of grenades and automatic gunfire.

"They were shooting for an hour. Nonstop. There were grenades. It was going, stopping. Kalashnikovs. Starting again," Guizani said.

Sporadic bangs and explosions continued, and at 6:30 a.m. at least seven explosions shook the center of Saint-Denis. Associated Press reporters at the scene could hear what sounded like grenade blasts from the direction of the standoff.

Investigators have identified 27-year-old Abaaoud, a Belgian of Moroccan descent, as the chief architect of Friday's attacks in Paris.

A U.S. official briefed on intelligence matters said Abaaoud was a key figure in an ISIS external operations cell that U.S. intelligence agencies have been tracking for many months.

Police vans and fire trucks rushed to the scene north of Paris. The site is just over a mile from the Stade de France stadium, which was targeted by three suicide bombers during Friday's attacks.

Police cordoned off the area nearby, including a pedestrian zone lined with shops and 19th-century apartment buildings. Riot police cleared people from the streets, pointing guns at curious residents to move them off the roads.

Saint-Denis Mayor Didier Paillard said public transport was suspended and that schools in the center of town would not open Wednesday.

Seven attackers died in Friday's gun-and-bomb rampage through Paris that killed at least 129 people and left over 350 wounded. French President Francois Hollande called it an "act of war" committed by the group.

ISIS again on Wednesday claimed responsibility for the attacks in Paris, vowing in its online English-language magazine to continue its attacks.

The magazine, released Wednesday, included the threat: "The Islamic State will continue to stand firm in the face of their transgressions and retaliate with fire and bloodshed in revenge for the honor of the Prophet (Muhammad) and the multitudes killed and injured in crusader airstrikes."

The magazine also included a claim that the group killed a Chinese and a Norwegian hostage and photographs of the bomb that it said brought down a Russian airliner over Egypt's Sinai Peninsula on Oct. 31.

Police say they are hunting for two fugitives suspected of taking part as well as any other accomplices. That would bring the number of attackers to at least nine.

French authorities had previously said that at least eight people were directly involved in the bloodshed: seven who died in the attacks and one who got away and slipped across the border to Belgium.

However, there have been gaps in officials' public statements, which have never fully disclosed how many attackers took part in the deadly rampage.

On Tuesday, officials told The Associated Press they now believe at least one other attacker was involved and they were working to identify and track down that suspect. Three officials spoke on condition of anonymity because they were not authorized to provide details about the ongoing investigation.

Surveillance video obtained by the AP also indicated that a team of three attackers carried out the shootings at one of the cafes. The video was among evidence authorities used in concluding that at least one other attacker was at large, the French officials indicated.

The brief clip shows two black-clad gunmen with automatic weapons calmly firing on the bar then returning toward a waiting car, whose driver was maneuvering behind them. Authorities believe the car is the same black SEAT-make vehicle that was found Saturday with three Kalashnikovs inside.

Police have identified one subject of their manhunt as Salah Abdeslam, whom French police accidentally permitted to cross into Belgium on Saturday. One of his brothers, Brahim, blew himself up in Paris.