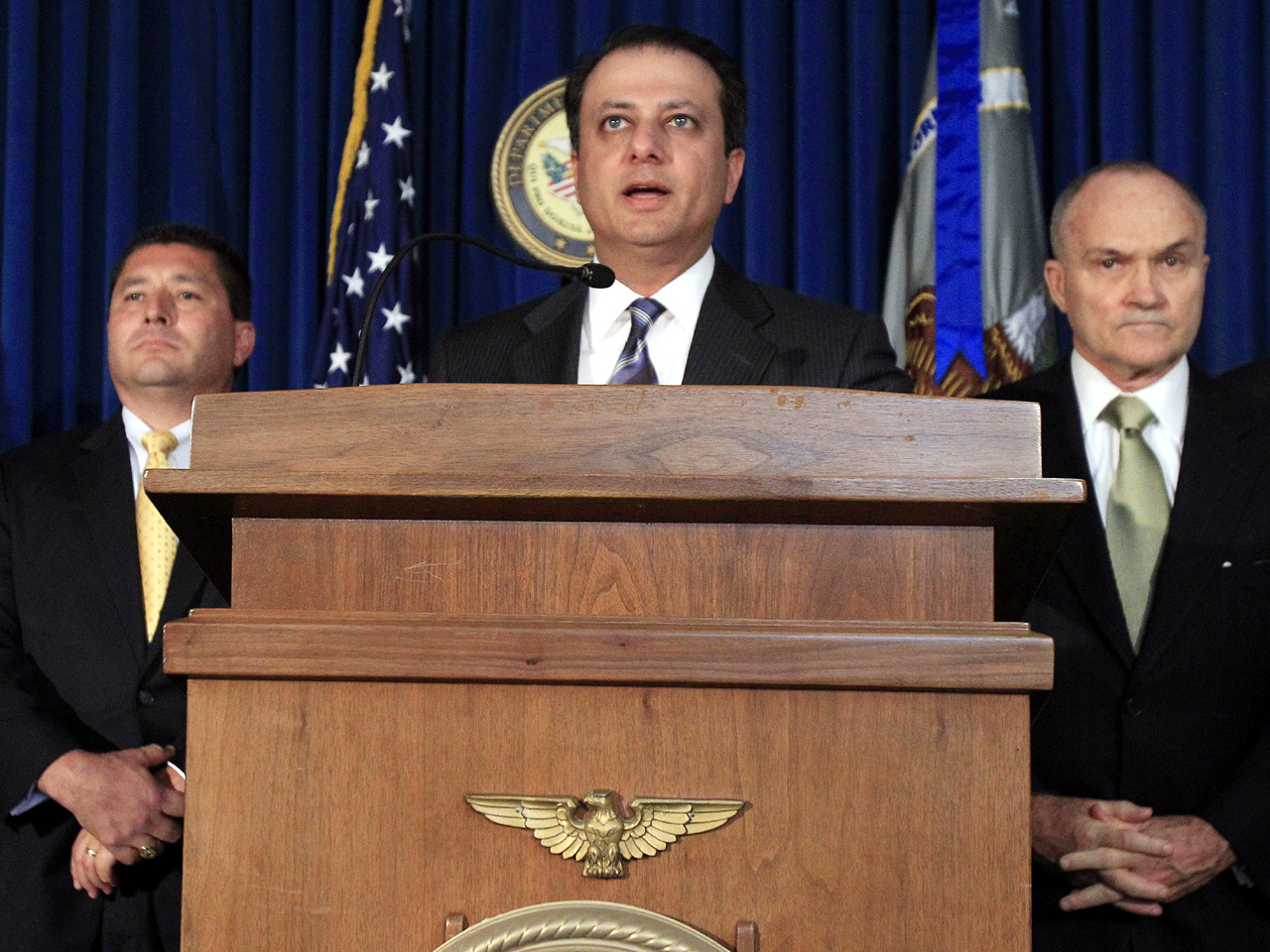 NEW YORK - A sting operation resulted in the arrests of 12 people, including five New York Police Department officers, on charges that they smuggled $1 million worth of firearms, cigarettes and slot machines they thought were stolen, authorities said Tuesday.

Three retired NYPD officers and a New Jersey correction officer are among the other defendants named in a federal criminal complaint alleging an undercover agent paid them more than $100,000 to moonlight as gun runners while under FBI surveillance the entire time. Three current officers also participated in a brazen theft of cigarettes they were told were worth $500,000, the complaint says.

The men were eager and willing to smuggle the weapons and commit other crimes "so long as the price was right," U.S. Attorney Preet Bharara said at a news conference announcing the arrests.

Arresting fellow law enforcers in a corruption case "is a heartbreaking thing," Bharara added. "But it is our duty to enforce the law and to uphold the rule of law — and to do so perhaps most unflinchingly when we come across people who have chosen to breach that sacred duty, because an officer who betrays his badge betrays every honorable officer as well as every member of the public."

The arrests come amid speculation that other NYPD officers could be facing less-serious criminal charges in a separate investigation of ticket fixing in the Bronx and with a backdrop of a high-profile push by Mayor Michael Bloomberg to combat illegal gun-trafficking.

Police Commissioner Raymond Kelly said the new case, involving officers assigned in Brooklyn, has no connection to the Bronx probe. He also defended the reputation of the nation's largest police department.

"The vast majority of police officers do outstanding work to protect the city," Kelly said. "A case like this is disheartening to the entire department."

The defendants were to appear in court later Tuesday to face conspiracy and firearms charges. The names of their attorneys were not immediately available.

The arrests stem from an FBI-NYPD internal affairs investigation that began in 2009 when a paid FBI informant tipped off authorities that an 18-year NYPD veteran, William Masso, was interested in making money by transporting stolen goods. In the months that followed, the informant and an undercover investigator posing as the ringleader began supplying the defendants and others cigarettes — purportedly stolen out of state — for resale in New York, the criminal complaint says.

Court papers described the informant as a non-U.S. citizen who "has been assisting the FBI in exchange for payment and aid in remaining in the United States."

Masso recruited younger officers from his Brooklyn precinct to join the smuggling ring, authorities said. He instructed the men to carry their badges while transporting the stolen goods and, if they were stopped by police, to say they were doing legitimate off-duty work, they added.

According to the complaint, Masso complained in a taped conversation that the officers weren't getting paid enough.

"They're risking a lot for a little. ... They know what's going and how much trouble they could get in," he said, according to the complaint.

In May, three of the officers and other defendants traveled to Virginia, where they received instructions from the informant and undercover on where to find $500,000 worth of cigarettes in trucks parked outside a warehouse, the complaint says. Using a bolt cutter, they broke into the rigs and stole 200 boxes they later delivered to a location on Long Island, it says.

Masso and other defendants also agreed last month to transport 20 weapons from New Jersey to New York using rented mini-vans, the complaint says. The cache was composed of three automatic rifles, a shotgun and 16 handguns with serial numbers that had been "obliterated or altered" so they couldn't be traced, it says.

Prosecutors say the officers were unaware that the weapons also had "been rendered inoperable by the FBI," the complaint says. The undercover gave four of the police officers about $5,000 each to help transport the guns, it says.

Bloomberg has long targeted this kind of illegal smuggling of guns into the city — inserting himself into the national debate over gun control and heading a national coalition of mayors advocating stricter enforcement.

"If the charges against the police officers arrested this morning prove true, it would be a disgraceful and deplorable betrayal of the public trust," Bloomberg said in a statement on Tuesday. "Our administration is taking every possible step to crack down on illegal guns and continue making the safest big city in the country even safer."

In the Bronx case, a dozen or more officers, including union representatives, are facing allegations they abused their authority by helping friends and family avoid paying traffic tickets.

The gun-smuggling complaint describes the confidential informant being introduced to Masso "as a person who could `fix' the CI's traffic tickets." The officer, it adds, "discussed his willingness to `fix' tickets."

Despite the chatter, "This is not a ticket-fixing case," Bharara said Tuesday.