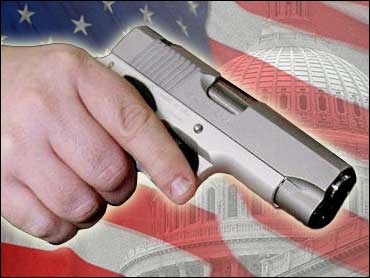 Companies that make and sell guns could soon gain significant new protections against lawsuits from victims of gun crimes, the Washington Post reports in Monday's editions.

In a show of the gun industry's resurgent clout in Washington, the newspaper says President Bush and a majority of lawmakers in Congress now support legislation that would prevent victims from making civil claims against companies that manufactured, imported or sold firearms used in crimes.

For example, legal experts say the proposed bill might prohibit victims of the Washington, D.C., sniper from suing the gun seller who supplied the Bushmaster rifle used in some of last October's shootings.

Some gun manufactures and dealers are worried they could be forced into bankruptcy if lawsuits from gun control groups and gun victims – with the possibility of hundreds of millions of dollars in jury verdicts – are allowed to continue.

More than two-thirds of House members recently voted in favor of the gun liability bill, and 52 senators say they support it, as does President Bush. Opponents need to convince at least 41 senators to filibuster the bill, but they face an uphill battle.

Some are attributing the bill's unexpected popularity, particularly among Democrats, to the renewed political influence of gun lobbyists – whose clout appears to have recovered after a setback following the 1999 Columbine shootings. A leading opponent of the gun bill, Sen. Frank Lautenberg, D-N.J., says, "People are frightened of a reaction from the gun lobby. Frankly, I think we need to stand up to them."

The Post says some lawmakers said privately that they feared a vote against the bill could incur the wrath of the gun lobby – and jeopardize their reelection hopes. A top Democratic Senate aide called the bill, the "Things You've Got to Do to Get Reelected Act."

In addition to the NRA, a little-known group called the National Shooting Sports Foundation is putting the pressure on lawmakers. The group has raised $100 million from gunmakers like Smith & Wesson and Remington to fight lawsuits and fund a national political campaign.

Foundation spokesman Gary Mahalik told the Post, "On the political side, we have spent millions of dollars on advertising" to convince Congress to back the gun liability bill. He said the group is preparing a new round of ads targeting Senate Minority Leader Tom Daschle and other Democrats who have not endorsed the measure.