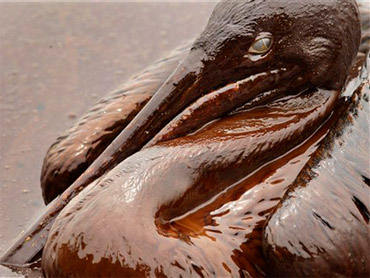 Scientists and volunteers have been waiting since the BP Gulf of Mexico oil spill began to start rescuing and rehabilitating wildlife.

Now that the oil has started coming ashore, birds and other wildlife are showing up covered in oil, and are helpless.

One hundred and fifty birds, mostly brown pelicans, have been brought to the former, also known as the Fort Jackson Bird Rescue center. They arrive brown, sticky, and covered in oil.

The cleaning process for these exhausted birds begins with covering them in Canola oil, followed by a thorough bath in dish-washing detergent and water. It takes a painstaking full hour of scrubbing, rubbing, and rinsing to get each bird clean.

To Vaccinate Or Not

Dr. Heather Nevill, an IBRRV veterinarian,told Turner, "The thing that concerns us the most, that's most likely to kill a bird, is the inability to feed itself. Inability to drink."

No matter how much cleaning, there is residual oil in the mouth and eyes of these birds, as is the case when it comes to sea turtles.

Biologists are recovering many of these endangered turtles from the water, both dead and alive. At the Audubon Nature Institute, veterinarians are more concerned with the oil ingested by the turtles than anything else.

Dr. Robert MacLean, head veterinarian at the Audubon Nature Institute, showed Bell how they clean and rehabilitate the turtles.

"This is the antibiotic that we're using to cover potential lung damage and gastrointestinal damage," said MacLean as he injected one rescued turtle.

When it comes to external recovery, mayonnaise helps break down the oil in sensitive areas, such as the eyes.

When Bell asked MacLean what his reactions are like emotionally and mentally taking care of these struggling animals, MacLean answered, "The emotions come later, at night, when we're done working. Our job when we come in is just to do the best we can."

As bad as these animals look now, their prospects are surprisingly bright. Many biologists say the chances of survival for these rescued animals are between fifty and eighty percent, sometimes even higher.

But optimism is tempered by fear. Mike Ziccardi, director of Oiled Animal Wildlife Care Network said, "It's literally going to take years if not decades to fully understand the impacts to the environment."

Bell explained on "The Early Show" that, while techniques for cleaning these animals have been perfected after other spills, such as Exxon Valdez, it's taking rescue workers a lot longer to get these animals rehabilitated. Because the oil has been out on the ocean and weathered, it has become thick like mousse, making it harder to wash out.

Rescuers clean up the birds, let them relax from the cleaning and let them go as long as they're healthy. That process usually takes about four-to-five days. But rescuers will take birds that are sick in as long as they need to, which can be up to two or three weeks.

As for the ultimate fare of wildlife in the region, there is no easy answer.

"This really is the tip of the iceberg. They don't know how many animals will be affected," said Bell. "When they get the animals clean and they're rehabilitated and go back into wild, now the question is, where do you release them? If you put them back out here, they can come right back in covered with oil."