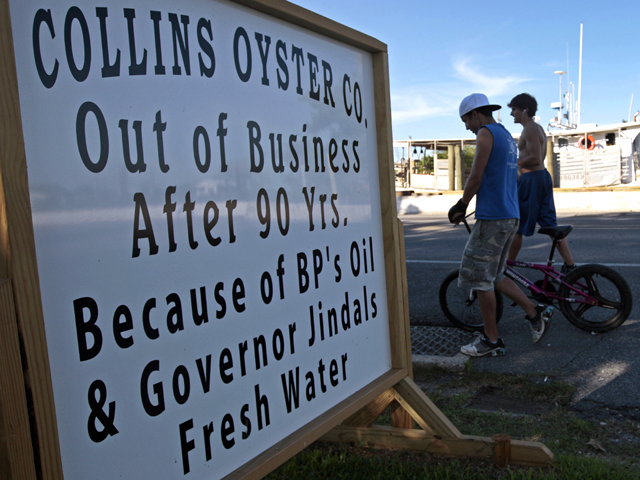 Wednesday will mark one year since the explosion that led to the nation's worst oil spill.

Nearly 200 million gallons gushed from BP's well. Experts say most of it's now gone from the Gulf of Mexico. In an Associated Press survey, more than three-dozen researchers rate the Gulf's overall health at 68, on a scale of 1 to 100, just a few points below the 71 it was before the spill.

EMPIRE, La - The scientists are encouraged, but those who live and work on the Gulf Coast may need more convincing, CBS News correspondent Mark Strassmann reports.

Take Louisiana oyster farmers. Last year, their catch plunged by more than half with the smallest harvest since 1966 -- and they've yet to win back many customers they lost after the spill.

For Gulf seafood, the perception problem begins right at the water's edge.

"They don't look the same; they don't smell the same," said Hopkins. "I won't eat it. I won't feed it to my family, and I recommend that no one eats it."

In a recent GNO Inc. survey of national restaurants, half of all customers had unfavorable views of Gulf seafood, despite government assurances.

In a Mississippi lab, government scientists test Gulf fish from the spill zone for 12 hydrocarbons, known carcinogens, found in oil.

Ten-thousand fish were tested there since last April. No red flags.

"We are not aware of even one piece of tainted seafood making it into the marketplace," said Eric Schwabb, an assistant administrator of the National Oceanic and Atmospheric Administration.

But professor Jim Cowan is troubled by dozens of diseased red snapper sent to him by worried Gulf fishermen.

The Louisiana State University oceanographer blames bacterial infections on an unknown toxin and in 20 years of studying Gulf fish has never seen before.

"It's too much of a coincidence for it to be not related to the spill, somehow, someway," Cowan said.

That sort of finding makes many consumers question all Gulf seafood.

Perception's the issue for Louisiana's oystermen. Roughly half their oyster beds were killed during last year's disaster. The rest are ready for market - if there was a market.

His oysters -- never touched by oil -- are still smeared by suspicion.

The fishermen want to get back in the water. That's where Jurisich plans to spend Wednesday's spill anniversary, filling his first oyster orders since last June.

Between then and now, some fishermen have survived with their six-month survival money from BP, and they're either putting in a claim for long-term damages or suing for the rest. But if this summer doesn't go well, a lot fewer boats will be on the water next year.