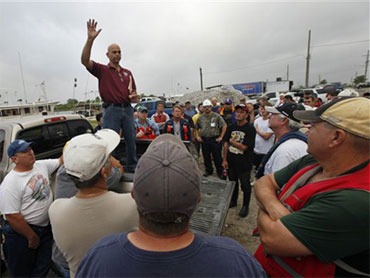 Much as he hates to say it, Mark Leonard knows it's true: The oil spill that is fouling the Gulf of Mexico may save his family's business.

Leonard, 34, is operations manager for Coastal Tank Cleaning, a company called in to help set booms to prevent oil from the Deepwater Horizon leak from getting into Lake Pontchartrain. The Morgan City-based company sent 10 workers and equipment to a staging area at Fort Pike, on the eastern tip of New Orleans.

"We don't want this to happen," he said. "We didn't want this to be our saving grace to keep the company going. But this is something that I think is helping a lot of companies that were down, and possibly wondering `When is it finally going to pick up?' `When can we start working again and staffing again and paying our bills?"'

The spill, now a month old, could end up killing the livelihoods of thousands of fishermen, restaurant workers, charter boat captains and tourism employees.

But for now, it's triggering a mini-boom in other jobs across the five-state region.

In coastal Louisiana, it's reminiscent of the job boom that followed Hurricane Katrina as thousands were put to work cleaning up debris, gutting house and rebuilding public buildings and entire neighborhoods. In St. Bernard Parish, a suburban New Orleans community where fishermen are working for BP in a fight to save their fishing grounds, the hurricane, which struck Aug. 29, 2005, damaged virtually every building and sank much of the fishing fleet.

Five years later, the area's economy is among the healthiest of major metro areas, according to The Associated Press Economic Stress Index, which assigns counties a score of 1 to 100 based on unemployment, foreclosure and bankruptcy data.

Some analysts believe the economic resilience powered by tens of billions in federal rebuilding aid is unsustainable. Once the money is spent, they say, the tourism-based economy and lower-wage jobs that dominated before Katrina are likely to re-emerge.

BP has spent more than $750 million so far in oil spill response initiatives. Spokesman John Curry said the company has hired more than 20,000 people as part of the response to the April 20 accident and its aftermath. Some are contractors and subcontractors, some are laborers hired to set boom.

Many have taken up residence at staging areas along the coast in Florida, Alabama, Mississippi and Louisiana.

In the fishing village of Cocodrie, about 80 miles southwest of New Orleans, the staging area sprouted up in a vacant lot at pier 56, next to Coco Marina.

"BP has basically moved in and taken the place of the recreational customers," said Michael Glover, whose family runs the 23-room Coco Marina. "We're feeding them three meals a day and they've rented all my rooms. My kitchen staff, my waitstaff, the housekeepers are all doing well, working a little more than usual. We're busy non-stop, every day."

Unskilled labor is getting a boost, too.

In Pensacola, Fla., 4,000 people in Escambia and Santa Rosa counties showed up at recruiting events to apply for 500 potential clean-up jobs.

The Workforce Escarosa Career Center hosted the recruiting for a Texas company looking for people with environmental or haz-mat certification. Only about 400 of the applicants actually had those - of more than 4,000 who applied at four events over a week's time, said Brittany Bailey, a spokeswoman for the center.

"We were surprised by the number of people who came," Bailey said. "These were dirty jobs. One requirement was you had to be able to lift 40 pounds. These were not desk jobs. It shows how desperate people really are at this point. We've never had lines wrapped around the building."

In fishing-reliant Gulf communities like Bayou La Batre, Ala., captains barred from fishing are signing contracts to pull the barriers across bays and shorelines, or to maintain the booms.

"It has helped to a point, but there's a limited number of people who have been able to get these jobs," said oyster harvester Avery Bates, vice president of the Organized Seafood Association of Alabama.

The skippers must get Coast Guard safety certifications before signing contracts to do the work, Bates said, and many must also be trained to handle hazardous materials. The demand for work is so great that boat workers quickly filled up a class held at a small church.

"We thought 300 would show up, and then 600 showed up. People couldn't even get in the building, and they had to reschedule another session," said Bates. "A few hundred have gotten work (but) we are still a long way from getting there."

In Cocodrie, the gravel-and-oyster shell parking lot on the Terrebonne Bay waterfront has a steady stream of trucks bringing in boom, contractors with skimmer boats and newly-hired hands who make trips out to barrier islands.

Still, everyone involved seems to know that whatever good flows from the oil spill in the short term, the long-term price will be heavy.