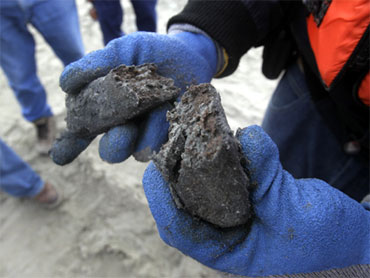 NEW ORLEANS - Months of investigation by a presidential commission and other panels reinforce the likelihood that companies involved in the Gulf oil spill will be slapped with criminal charges that could add tens of billions of dollars to the huge fines they already face, legal experts said Thursday.

(Scroll down to watch a report on this story)

The reports don't blame a single person or group responsible for the series of mistakes. That means in the end no one may go to prison for the worst offshore oil spill in U.S. history.

BP, Transocean and Halliburton should survive thanks to their financial arsenal, though charges would take another chink out of their armor.

"The evidence of negligence is too compelling and the harm is too great," said David Uhlmann, former chief of environmental crimes at the Justice Department. "The Justice Department is likely to believe that BP, Transocean and Halliburton were negligent and should be criminally charged. There's no question about that."

Uhlmann, now a law professor at the University of Michigan, cited excerpts released Wednesday from the presidential oil spill commission's report, saying it alone shows the standard for criminal charges has been met.

Among the panel's conclusions: decisions intended to save time and money created an unreasonable amount of risk that triggered the April 20 explosion in the Gulf of Mexico and led to the oil spill. The panel said another similar disaster could happen again without significant reforms by industry and government.

But the panel also concluded that the mistakes were the result of systemic problems, not necessarily the fault of any one individual.

The blast killed 11 workers on the rig Deepwater Horizon and led to more than 200 million gallons of oil spewing from BP's well a mile beneath the Gulf of Mexico, according to government estimates. BP disputes the figure, but has yet to provide its own.

Gregory Evans, a Los Angeles attorney who is an expert in environmental law, said prosecutors have wide discretion about whether to bring criminal charges.

"It appears that the panel has concluded that BP, Transocean and Halliburton and several subcontractors working for them took a series of very hazardous steps which appeared to be motivated by economic concerns or at least efficiency," Evans said. "This again can be seen by a prosecutor as evidence of an environmental crime."

Evans also noted, however, that the commission blamed government regulators in its report, which could mitigate culpability of the companies.

"Given the wide latitude they have, I think they could go either way on it," he said.

Criminal charges would cause fines to soar.

Under the Clean Water Act, BP, alone, already faces up to $21 billion in civil fines. Evans noted that under the Alternative Fines Act, a criminal prosecution would pose the threat of a criminal fine equal to twice the aggregate financial losses caused by the offense. A July study by Oxford Economics commissioned by the U.S. Travel Association estimated that the oil spill could cost the Gulf region $22.7 billion in travel-related economic losses over three years. That could translate into a more than $45 billion criminal fine.

"We continue to aggressively investigate the causes of the spill, and will examine all evidence and facts that may be relevant to that investigation and all parties potentially responsible for the spill," Justice spokesman Wyn Hornbuckle said.

The companies pointed fingers at each other - again - in statements after the presidential panel's conclusions.

BP PLC said the accident was the result of many causes, involving multiple companies. Transocean Ltd., which owned the rig being leased by BP to perform the drilling, said "the procedures being conducted in the final hours were crafted and directed by BP engineers and approved in advance by federal regulators." Halliburton Co. also said it acted at the direction of BP and was "fully indemnified by BP."

Robert Force, a Tulane University professor who is an expert in maritime law, said it is increasingly possible some of the companies will face charges. He did caution that the question of negligence is a tricky one.

And individuals involved with the rig and well may be able to rest easier.

"I haven't seen a revelation that said, 'we have found something really bad,' where there was an intentional violation of a regulation or improper conduct. Usually something like that would have been revealed by now," said Steve Yerrid, a Tampa, Fla. attorney who until Dec. 31 was oil spill counsel to former Florida Gov. Charlie Crist. "The likelihood of an individual or a group being indicted for a criminal offense has waned with time."

Big companies can usually survive criminal convictions, but not always.

Arthur Andersen, once one of the so-called "Big Five" accounting firms, was found guilty of obstructing justice in 2002 for the shredding of documents related to the Enron scandal. Although the conviction was later reversed by the U.S. Supreme Court, the Chicago-based firm's reputation was damaged enough to put it out of business.

On the other hand, Hospital Corp. of America - the nation's largest private hospital chain - is thriving despite paying a record $1.7 billion fine for massive Medicare fraud involving guilty pleas to 14 felonies that occurred when the company was known as Columbia/HCA.

Besides possible criminal charges, the investigations also could play a key role in the outcome of the hundreds of civil lawsuits. In those cases, attorneys for the fishermen, businesses, property owners and others want to prove gross negligence by BP and its partners, which could lead to bigger payouts.