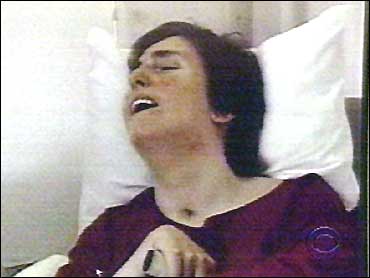 An independent guardian concluded there is "no reasonable medical hope" that a severely brain-damaged woman at the center of a right-to-die legal battle will improve, according to a report released Tuesday.

But as long as there is controversy in the case of Terri Schiavo, guardian Jay Wolfson is asking to remain on the case in hopes of settling the fight among her husband, her parents and Gov. Jeb Bush, according to the report, which was delivered to Bush.

Wolfson also recommended that swallowing tests be conducted on Terri, to see if she would be able to eat on her own.

The University of South Florida professor was appointed by a judge last month to investigate whether Schiavo's husband, Michael, should be allowed to have a stay lifted and remove her feeding tube. Michael Schiavo had the feeding tube removed in October, but a hastily passed law allowed Bush to have it reinserted six days later as her parents, Bob and Mary Schindler, had requested.

Wolfson tried to broker a settlement among Michael Schiavo, his in-laws and the governor, according to the report, but negotiations broke down Sunday.

Bush said Tuesday that nothing in the report has changed his mind that it was right to keep Terri Schiavo alive.

"I see nothing in the report that changes any feelings I have about whether or not the stay should be lifted," Bush said, adding he respected Wolfson's efforts and agreed that Terri should undergo swallowing tests.

"That's the good news part of this," he said.

The Schindlers contend their 39-year-old daughter — who doctors have said is in a persistent vegetative state — can still hear and react to them and could recover.

But Wolfson's report said there was "no likelihood" Terri Schiavo's condition will improve. She cannot consciously interact with her environment, and there is evidence she cannot eat or drink on her own, the report said.

Wolfson, an attorney and health sciences professor, is an expert in health-care financing. He based his conclusions on Terri Schiavo's medical records.

Michael Schiavo's attorney, George Felos, said he was "very pleased" with the report.

"(Wolfson) is very clear in saying that the medical evidence is clear and convincing that she is in a persistent vegetative state with no hope of recovery," Felos said. "I think it's important that be recognized."

Terri Schiavo suffered severe brain damage in 1990 when her heart temporarily stopped because of a chemical imbalance and cut off oxygen to her brain.

Michael Schiavo has said his wife did not want to be kept alive artificially. Her parents have said she has no such wish.

Until a resolution can be reached, Wolfson asked to stay on the case and said Terri Schiavo should have an independent guardian whose only charge is to look out for her interests. Michael Schiavo currently serves as his wife's guardian.