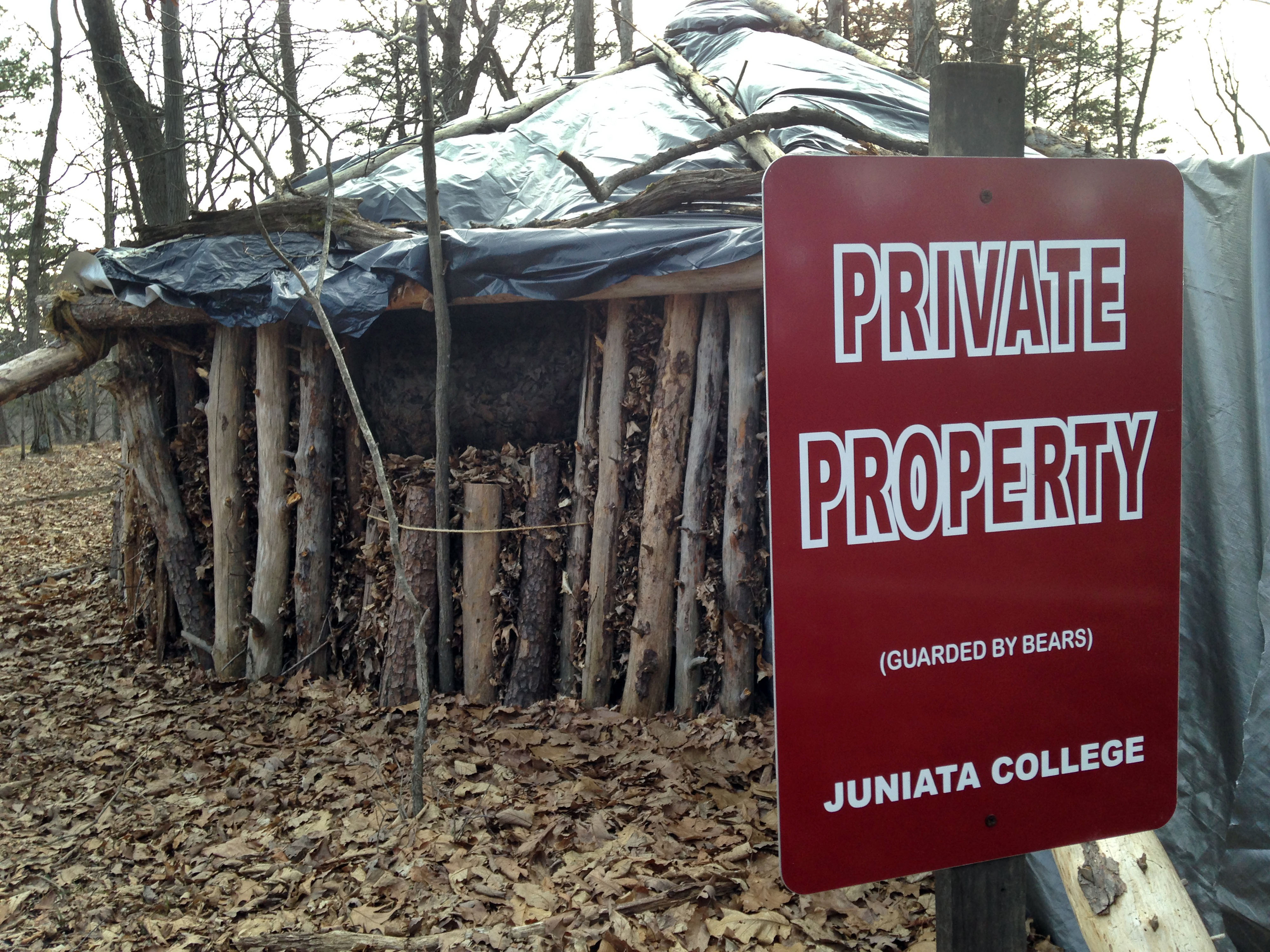 HUNTINGDON, Pa. -- After living for nearly a year in a sturdy yet rudimentary shelter he built for himself in the woods, you would think Dylan Miller would be looking forward to springtime.

Truth is, the soon-to-be college graduate, who has spent the last 10 months of his senior year living off campus - WAY off campus - really didn't mind eating, studying and sleeping in winter's chill, even when freezing temperatures threated his exclusive experiment.

"It's a lot like jumping into a cold lake, and after a minute you're used to it and you're swimming around happily," said Miller, a student at central Pennsylvania's Juniata College. "I just wore shorts all winter because my body was so well acclimated."

It's one of the changes that took place within the philosophy and English major, who decided to live like Thoreau - not just read his work - for his senior research project on simple living.

Last summer, Miller, 22, of Meadville, constructed a 17-by-17 hut from fallen timber, using leaves as insulation and a tarp for a roof. Happily trading climate control, indoor plumbing and electricity for the solitude of the woods, Miller lugged essentials up a steep trail as his classmates settled into their dorm rooms and furnished their apartments. He's spent months studying by candlelight, drinking tea and keeping an eye on the occasional bear - testing a notion that a person can live with less and still find contentment.

Outside of the hut is a sign that reads: "Private Property (Guarded by Bears)."

"He wanted to see how he could live minimally and still kind of maintain a lifestyle that worked in the contemporary world," said his academic adviser, Will Dickey, an assistant professor of English at the small liberal arts school.

The title of his project - Content with Nothing - carries a double meaning.

"The first meaning is the problem. We can't be content with anything, really. Nothing can make us content; we're always looking for something else," Miller said. "And then the solution, content with nothing, means we are content with having nothing. We don't look externally for satisfaction or desire luxury. So the whole project is how to get to that final state of contentment."

Officials at Juniata were initially skeptical of Miller's idea to live in the woods about a 30-minute walk from campus, but warmed to it after Miller submitted a 21-page proposal, addressing their concerns about his well-being and the academic rigor of his project.

He agreed to keep a cellphone with him for emergencies, and stayed with friends for about a week when temperatures drastically dropped.

A February 22 Facebook post by Miller revealed how tough the elements could get: "After a week of torturous night cold, its finally warm enough to sleep in my own 'bed'... its scary how happy I am about this. Good...night..."

Beyond those concessions to safety, Miller is fairly self-reliant. He hauls propane tanks and gallons of water up the hill and carts his trash back down, uses an outdoor latrine, and subsists on rice, beans and dried soup. The interior is surprisingly cozy and comfortable, with wooden floors, a writing desk lined with books and a small heater that kicks in when the temperature outside reaches 20 degrees.

"Since this is my home now and it's become normal to me, it doesn't really feel like an endurance contest anymore, or a project. It's just where I live," he said.

It may be his current home but Miller plans to tear down his shelter when he graduates next month. It'll be a fitting coda to his year of living simply - a year in which he says he's become more patient and less attached to things.

"Everything in the woods rots and changes and becomes everything else," Miller said. "So I wouldn't have it any other way with the shelter."