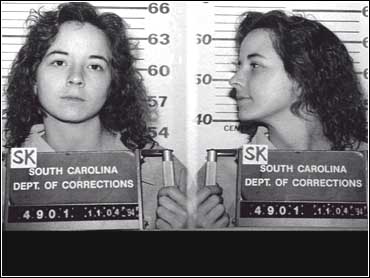 A prison guard was fired after he allegedly admitted having sex with Susan Smith, who is serving a life sentence for drowning her two sons in a lake, corrections officials said.

The allegations prompted a state senator who oversees the Corrections Department to schedule a public hearing to investigate problems involving prisoners and employees.

The Corrections Department has asked the U.S. Justice Department to review procedures to determine if any changes are needed.

Smith, 29, told investigators — who were checking out a tabloid report that she was beaten in prison — that she had four sexual encounters with Lt. Houston Cagle earlier this year, Corrections Department spokesman John Barkley said.

Cagle, 50, confirmed the allegations and was fired Thursday, Barkley said. There was no evidence Smith was beaten.

Attempts to reach Cagle were unsuccessful. His telephone number is unpublished.

Having sex with an inmate is a felony with a possible 10-year prison sentence, Corrections Department Director Doug Catoe said. Richland County prosecutor Barney Giese said he would not decide on possible criminal charges until a state investigation is done.

Although there is nothing to indicate that Smith was forced to have sex with Cagle, the relationship was a violation of authority, Catoe said, adding, "Basically there is no such thing as consensual sex between staff and inmates."

Smith has a job assignment in the prison library and has free time on prison grounds. She could lose some of those privileges, Barkley said. Messages left with her attorney were not returned.

Smith's 3-year-old and 14-month-old sons drowned in 1994 after she let her car roll into a lake. She first claimed the boys had been taken in a carjacking. Nine days later she confessed.

She was convicted of murder in 1995. A jury spared her the death penalty.

"The hearing is in response to all of that," Thomas said. "This could be the tip of the iceberg. The department will tell you that these are purely anomalies, but there could be a lot of this going on. This is a serious problem."

Thomas set a Sept. 12 hearing of the Corrections and Penology Committee and plans to recommend random polygraph tests for prison staff.