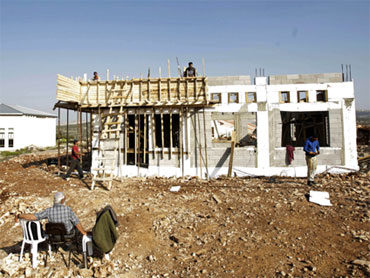 Jewish settlements control more than 42 percent of the West Bank, and much of that land was seized from Palestinian landowners in defiance of an Israeli Supreme Court ban, an Israeli human rights group said Tuesday.

The group's findings echo what other anti-settlement activists have claimed in the past: That settlements have taken over lands far beyond their immediate perimeters, sometimes from private Palestinians.

Israel's settlements have been a much-criticized enterprise throughout the decades and a major obstacle to peacemaking with the Palestinians.

"The extensive geographic-spatial changes that Israel has made in the landscape of the West Bank undermine the negotiations that Israel has conducted for 18 years with the Palestinians and breach its international obligations," the B'Tselem group said in a summary of its report.

Report: "By Hook and By Crook" (B'Tselem)

Settlers disputed the figures and said the report by the B'Tselem group was politically motivated. Israeli officials had no comment.

The report was based on official state documents, including military maps and a military settlement database, the B'Tselem said.

Although the actual buildings of the settlements cover just 1 percent of the West Bank's land area, their jurisdiction and regional councils extends to more than 42 percent, the group added.

Twenty-one percent of the land for these settlements was seized from Palestinian landowners, much of it after Israel's Supreme Court outlawed the practice in 1979.

"It's a political report by an organization that has been taken over the most radical anti-Israel elements," Dayan said. "The whole point is to sabotage the meeting between (Israeli Prime Minister) Benjamin Netanyahu and Barack Obama."

Netanyahu was en route Tuesday to Washington, where he was due to meet with President Obama later in the day to discuss advancing peacemaking and other regional issues.

Israel Opens Gaza Border to Most Goods
Raviv: Obama, Netanyahu Will Learn They Need Each Other

Some 300,000 Jews live in West Bank settlements and an additional 180,000 live in Jewish neighborhoods in east Jerusalem. Israel captured both territories from Jordan in the 1967 Mideast war, along with the Gaza Strip.

The Palestinians envision all three areas for a future state.

Even as 130 are killed, young Iranians risk it all to demand change
Thanks for reading CBS NEWS.
Create your free account or log in
for more features.
View CBS News In
CBS News App Open
Chrome Safari Continue
Be the first to know
Get browser notifications for breaking news, live events, and exclusive reporting.