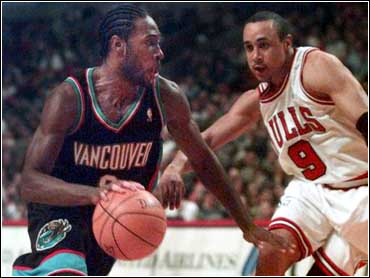 Shareef Abdur-Rahim was so sick he needed IVs, and the Vancouver Grizzlies were so beat from their overtime loss in Cleveland the night before they were tired before the game even began.

Imagine what they'd have done to the Chicago Bulls if they were healthy and rested.

Though Abdur-Rahim scored only eight points, he grabbed 14 rebounds and Michael Dickerson picked up the offensive slack with 25 points Tuesday night as the Grizzlies beat the Bulls 85-81.

"I guess I go by the motto, `If I can walk, I can play,"' said Abdur-Rahim, who played 37 minutes despite a bout with the stomach flu that required two IVs. "If I can do something to help, I will. If I feel I'm hurting the team, I won't go out there."

Bryant Reeves added 15 points for the Grizzlies, who have beaten Chicago twice after losing their first seven games against the Bulls.

The game might have had a different outcome, but Chicago went 16-of-28 from the line, missing 10 in the fourth quarter alone.

"The missed free throws really set us back," said Elton Brand, who led the Bulls with 25 points. "We hit them, we're right in the game."

While Brand might have been Chicago's leading scorer, the highlight of the night for the Bulls was the John Starks' lovefest going on in the stands. Starks, loathed by Chicago fans for his thuggery as a New York Knick, actually had them chanting "We want Starks! We want Starks!" with 6:53 left in the game.

"It felt good," he said. "Whenever you come into a situation like this, you don't know what to expect. When you go out and play well, it changes peoples' minds."

Starks drea huge cheer when he went in, and more yelling and screaming when he made two free throws to bring the Bulls within 79-74 with 3:31 left. There was another big roar when he made a 3-pointer to cut Vancouver's lead to 82-78 with 1:27 left.

He finished with 17 points on 6-of-9 shooting and also had four assists.

"Whatever team I'm on, I want to win," said Starks, who admits it's strange to put on a Chicago uniform. "That's the way I am as a player. I'll never change my attitude about the game. Once I do, it's time to put down the ball and hang up my sneakers."

After Starks' 3-pointer, Hersey Hawkins made the first of two free throws. But he missed the second shot and Abdur-Rahim grabbed the rebound with 14.8 seconds left. The Bulls sent Abdur-Rahim to the foul line four times, and he converted three of the shots to put the game away.

Abdur-Rahim, who came down with the flu Monday and skipped a workout Tuesday morning, played 37 minutes.

"I don't want to look back at the end of the year and say, `We could have won this game or that game,"' he said. "We need to get every win we can."

And thanks to Dickerson, the Grizzlies got this one. After scoring 17 in the first half, he opened the fourth quarter with three free throws to give Vancouver a 71-64 lead with 10:36 left. But the Grizzlies went the first six minutes without a field goal, letting the Bulls cut the lead to 72-71 on Ron Artest's free throw.

Dennis Scott finally made a jumper from the left wing with 6:20 left, following it with a buzzer-beater jumper and a 3-pointer. Abdur-Rahim pushed the lead to 82-75, dunking and then making the second of two free throws with 1:46 left.