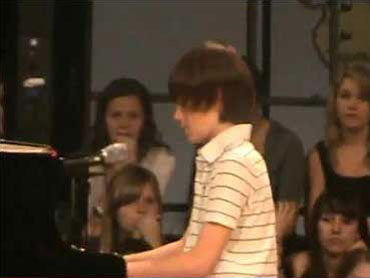 GaGa's platinum selling album, "the fame" won two Grammys. While her video for "Bad Romance" is the most-watched in YouTube history. Her songs have spawned scores of tributes from just about anyone who has a camera.

But Greyson's performance has stood out from the rest. The video of his performance has gotten more than nine million hits. And in just 16 days, has launched him from unknown sixth grader to instant celebrity. On Thursday, he appeared on the "Ellen DeGeneres Show."

He told DeGeneres he's taken piano lessons for three years, but never had a voice lesson. He even got a call from Lady GaGa herself.

She told Chance, "Greyson, you're so sweet and so talented."

Bill Werde, editorial director of Billboard magazine, told CBS News, "In the last year or two, You Tube has pretty much become the go-to place to discover music. Period."

Greyson's role model for success is "tween" star Justin Bieber. Just four years older, Bieber has a similar look and was plucked from obscurity after being discovered by Scooter Braun, a music industry manager, in 2008.

Since signing a record contract, seven of Bieber's songs have landed on Billboard's Top 100, and his recently released album, "My World 2.0" sold more than half a million copies in its first two weeks.

But is this the beginning of a career for Chance?

Braun, Bieber's manager, said he's heard that many industry heavyweights have been in contact with the new YouTube star.

Braun said he's seeing a similar quality in Chance that he saw in Bieber.
"When I found Justin, I kind of had this gut feeling that maybe you want to watch more. And my whole idea was that millions would want -- would feel the same way. And I think Greyson's had that same success. You want to see more from him. And that little special thing that makes you want to watch more is really what's special about him."

Braun said the next step for Chance's success is that he be surrounded by "the right people" who want him to grow up and be a good man.

He said, "As far as becoming a child star into an adult star, the secret is becoming a good adult. The business is a lot harder than people realize. As 16, my mother would say I was probably a jerk. So for them to have to be on 24/7 and the whole public watching and waiting for them to make a mistake, the secret is learning to have integrity."

Braun said he helped Bieber become a star after YouTube was getting the content out to the people and showing the star's abilities, such as playing a variety of instruments.

He added, "The other secret was a lot of hard work. I've worked with a lot of artists and Justin, as a child, works harder and want it is more than any adult artist I've ever worked with. It's traveling every single day, going to radio stations, and then the other rule we have is no one is allowed to treat Justin any different. We'll go to a hotel and they have a big suite waiting for Justin, and we give that suite to his mother, and put him in the regular room and make sure he grows up to be a good kid."