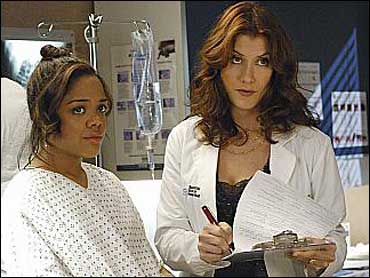 In tonight's episode of "Grey's Anatomy" Addison (Kate Walsh) reveals that she and McDreamy (Patrick Dempsey) have divorced, while McDreamy learns the truth about Addison's relationship with Mark (Eric Dane).

Aside from the relationship drama, Dr. Bailey treats a young mother struggling to deal with a life-threatening breast cancer diagnosis.

The latter is familiar territory for Walsh.

"My mom, she's a breast cancer survivor and because of that I had started getting mammograms once a year, starting at age 30," Walsh said in an interview with The ShowBuzz Wednesday. "Previous to that my doctors had said, 'You don't have to start until 40 and older,' so I would have never even thought about it. You know, it's not the most comfortable procedure but it really is the best thing we've got doing in terms of early detection."

According to Walsh, tonight's episode, which is dedicated to breast cancer awareness, is especially powerful. "It's so compelling mostly in that (the character) is so young, she's in her 20s. I think a lot of people just aren't aware how young you can be and be diagnosed with breast cancer. The message, it's just heart wrenching, but it is ultimately one of hope," she said.

Walsh, 39, began her career in Chicago theater. She appeared on shows such as "Mind of a Married Man" and "The Drew Carey Show" before landing the "Grey's" gig in 2005. The Arizona native watched her mother, Angela, battle cancer after she was diagnosed around age 60.

Her mom is healthy today and will be watching tonight. "She watches every Thursday but particularly this Thursday," Walsh said. "I'm so happy that she's here, she's a strong powerful force of nature and I'm glad she's with me today."

Producers saw the episode as an opportunity to recognize Breast Cancer Awareness month.

"We have such a big audience and it's a great opportunity to put story lines out there that are socially relevant and medically relevant," said Walsh. "Our show-runner Shonda Rhimes feels very passionate about it, as do many of us who have personally come in contact with the disease."

The episode, titled "Oh, The Guilt" was made in association with the Ford "Warriors in Pink" campaign, benefiting the Susan G. Komen Breast Cancer Foundation. The foundation is thrilled with the attention the show will bring the disease.

"For people to see this and to hear it discussed openly in real life terms is extremely important for all of us who are fighting this war against breast cancer," said Nancy Brinker, founder of the Susan G. Komen Breast Cancer Foundation.

The cast has shown its support for the campaign by loading up on garb. "We've been wearing the scarves and T-shirts and caps and thermal shirts," she said. "I think that, most importantly, just to get the message out there of getting exams for women and early detection can make this — if you are diagnosed — a very livable disease."

2Walsh can't dish much about the drama that will develop throughout the rest of the season, but she says that after tonight's episode we'll know just as much as she does. For now, though, it looks like things are over between Addison and McDreamy and that Addison and Meredith (Ellen Pompeo) may be working toward a friendship.

"I think last week's episode was a great step in the right direction. Life and relationships are complex so they'll continue to have those twists and turns," she said.

And what about the on-set drama that made headlines last week? Walsh said she wasn't there when actors Patrick Dempsey and Isaiah Washington nearly came to blows while filming a scene.

"I'll say that we're all hugely grateful to be a part of the show and really what the show is about is great story telling and great writing and great acting," she said, adding that the whole cast does hang out off-camera, going to dinner and such.

Even with all of her success as a TV surgeon, she has no groundbreaking secrets to beating the common cold. She said, sniffling through the interview, "I'm fine. That's why we've got cold medicine."
By Amy Bonawitz