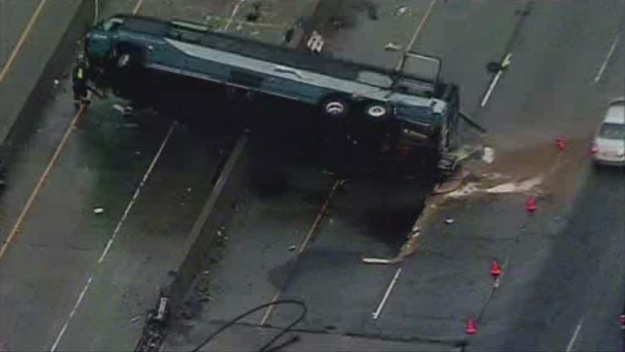 SAN JOSE -- Two women were killed and 18 passengers injured when a Greyhound bus traveling to the Bay Area overnight from Los Angeles flipped over and crashed on northbound U.S. Highway 101 in San Jose Tuesday morning, according to the California Highway Patrol.

Several passengers have told CBS San Francisco that the driver feel asleep at the wheel right before the crash. However, investigators would not confirm the passengers' claims.

The driver, who was one of those sent to the hospital, said he was tired before the crash. He stopped for a caffeine jolt at the last stop before the wreck, about 30 miles south in Gilroy, according to the CHP.

"He stated that he did feel fatigued and that he did get some coffee in Gilroy when he dropped off two passengers," CHP Officer Chris Miceli said, adding that the cause of the crash is still under investigation.

A CHP officer said both passengers who were killed were ejected from the bus.

San Jose Fire officials said 18 passengers were injured in the crash. Several of the injured were taken to the hospital with major injuries while some were treated at the scene.

All passengers who were not injured were placed onto a Santa Clara Valley Transportation Authority bus, according to the CHP.

Greyhound spokeswoman Lanesha Gipson said the bus -- No. 86558 -- was on schedule traveling from Los Angeles to San Francisco with stops in both San Jose and Oakland.

The cause of the crash has not yet been determined, Gipson said.

"We're cooperating fully with local authorities on their investigation and conducting our own," she said.

The driver was asked to submit a blood sample to test for alcohol and drugs, Miceli said. Prosecutors have been notified, which is a routine measure, he said.

In addition to the CHP inquiry, the National Safety Transportation Board is sending a team of investigators, agency spokesman Eric Weiss said.

The bus careened into safety barrels, flipped over and came to rest on the center divider. Several lanes of the highway in both directions had been closed by the accident.

The CHP said the diamond lanes in both directions would be blocked for at least eight hours.

The bus appears to have been the only vehicle involved in the crash.