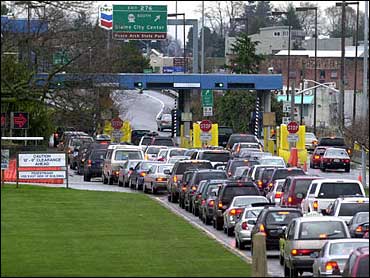 One of the U.S.-Canada border's busiest crossings was closed for about an hour Monday after guards found a grenade in the glove compartment of a car leaving the United States, Canadian officials said.

The driver, a woman from Houston, was taken into custody but released after interviewers determined she hadn't known the grenade was in the car, Royal Canadian Mounted Police spokesman Tim Shields said. The woman's husband works for the U.S. military and is apparently stationed at Fort Lewis, south of Tacoma, he said.

"She was apparently new to the area," he said.

The 28-year-old woman didn't realize her mistake until she arrived at the Peace Arch border crossing in Blaine, and she had no choice but to drive through Canadian customs. An officer searched the car, which is registered to her, and found the grenade, he said.

She claimed to have no idea the weapon was there and "appeared to be quite traumatized," Shields said.

No charges were expected from Canadian authorities against the woman, who was returned to the United States Monday afternoon, said Canadian customs spokeswoman Paula Shore.

But a Homeland Security spokesman in Seattle says FBI and customs agents detained the woman when she re-entered the U.S. Authorities are trying to learn where the grenade came from.

Shore said the grenade was discovered about 1 p.m., prompting the closure and evacuation of the Peace Arch crossing. It reopened at 2 p.m.

During the closure officials rerouted traffic to the truck crossing on Pacific Highway, less than a mile to the east.

The grenade was being tested Monday afternoon, Shore said, but she would not say whether the device was live.

About 8 million vehicles cross at Blaine, the northern end of Interstate 5, every year.