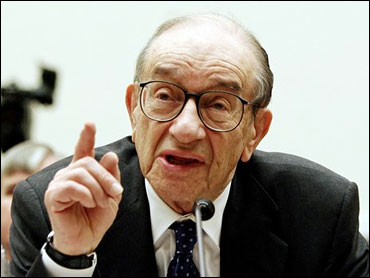 Speaking at an economic conference in London, Greenspan said so far the United States has had no problem financing its current account trade deficit, which last year hit a record $668 billion, because of the flexibility of the American economy.

But he said such flexibility would be threatened by rising protectionism, which would increase barriers to the flow of goods and investments across the U.S. border. He also worried about the harm that could be done if the United States and other nations do not get their budget deficits under control.

"If ... the pernicious drift toward fiscal instability in the United States and elsewhere is not arrested and is compounded by a protectionist reversal of globalization, the adjustment process could be quite painful for the world economy," Greenspan said in his prepared remarks, which were released in Washington.

The London speech represented the second warning Greenspan delivered Friday on the threats posed by rising budget deficits. In an earlier speech, he had said that there could be severe consequences for the U.S. economy if policy-makers do not attack a federal budget deficit that is projected to soar with baby boomer retirements.

In that taped speech to a conference in Philadelphia, Greenspan said that Congress would likely have to make "significant adjustments" in reducing benefits for future retirees. He said it appears the country has promised more than it can afford to deliver in Social Security and especially Medicare payments, given that health care costs have been exploding.

Greenspan, who will step down as Fed chairman after 18 and a half years on Jan. 31, used both of the Friday speeches to return to themes he has been emphasizing over the past two years.

He said that the looming retirement of 78 million baby boomers will put severe strains on the country's finances and without changes could disrupt the economy by driving up interest rates from the increased government borrowing.

And he said that the nation's huge trade deficits can be financed as long as the country does not jeopardize the flexibility of the U.S. economy in such ways as increasing protectionist barriers.

"If the currently disturbing drift toward protectionism is contained and markets remain sufficiently flexible," Greenspan said, then a rise in Americans' savings rates and other adjustments needed to reduce the U.S. trade deficit should proceed without problems.

Greenspan was in London to attend his final meeting of finance ministers and central bank president of the world's seven largest economies.

In addition to their normal discussions of the global economy, the Group of Seven finance officials were going to honor Greenspan with a retirement party, including a dinner Friday night, during the meetings.

In the Philadelphia speech, which had been taped earlier, Greenspan urged Congress to act quickly so that the baby boomers will have time to adjust to potential benefit cuts.

Greenspan did not outline what benefit cuts should be considered but in the past he has endorsed proposals such as raising the age at which retirees can draw full Social Security benefits.

"The likelihood of growing deficits in the unified budget is of especially great concern because the deficits would drain a correspondingly growing volume of real resources from private capital formation and cast an ever-larger shadow over the growth of living standards," Greenspan said.

"In the end," he warned, "the consequences for the U.S. economy of doing nothing could be severe."

In a brief mention of current economic conditions, Greenspan said that the economy had delivered a "solid performance" so far in 2005. "And despite the disruptions of hurricanes Katrina, Rita and Wilma, economic activity appears to be expanding at a reasonably good pace as we head into 2006," he said.

However, he said the positive short-term outlook for the economy was occurring against a backdrop of concern about the government's long-term fiscal health.

"Our budget deficit will substantially worsen in the coming years unless major deficit-reduction actions are taken," Greenspan said, echoing comments he made most recently in an appearance Nov. 3 before Congress' Joint Economic Committee.

He again called for Congress to reinstate budget rules that expired in 2002 that required any future increases in benefit payments or cuts in taxes to be paid for by cutting government spending in other areas — or by increasing taxes.