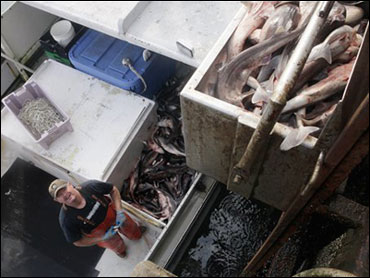 The sea air isn't all that's salty when fishermen in the Cape Cod town of Chatham talk about the hated spiny dogfish.

Fishermen consider the small shark, renowned for its stunning appetite, the vermin of the ocean. They say the once-threatened dogfish has rebounded under federal protections to an insatiable mass that's devouring more valuable and scarce fish that regulators are trying to restore, such as cod, while it destroys nets, steals bait and eats catch right off their hooks.

"It's a (expletive) plague of locusts is what it is," hook fisherman Peter Taylor said. "I don't care if I make a penny on dogfish, we just need to kill them."

Fishermen want to catch more of the ornery, schooling predator to dent its population and make more money off it, but rules forbid that.

Still, the dogfish dispute has prompted regulators to do a fresh assessment of the stock and how it's measured, beginning in January. Paul Rago, a National Marine Fisheries Service biologist, said he was confident dogfish have been well managed but admits anxiety amid the questions.

"It's always a concern to me that if we're off on some assumption, we've missed something, you know, it has immediate outcomes," he said. "It's fine for us to say, 'Whoops.' But for the guy that's at the end of that thing, it's not acceptable."

In the late 1990s, the dogfish population fell to critically low levels as fishermen targeted females. Regulators say the stock is now stronger and more abundant near shore, where fishermen see them, but remains vulnerable. Scientists project declines in coming years because males outnumber the slow-maturing, unproductive females.

The despised dogfish is a "perfect scapegoat" for the fishery's problems, said Sonja Fordham, a shark specialist with the International Union for Conservation of Nature who blames decades of overfishing.

"I think it's a very popular notion to say this voracious predator is scarfing up all the good stuff," Fordham said. "The facts don't back it up."

The dogfish, which has two spines on its back, prowls waters from Nova Scotia to Florida, eating anything in its way, including other dogfish.

On a recent trip off Chatham, dogfish were hanging from almost all 300 hooks fisherman Jamie Eldredge spooled into the ocean 20 minutes earlier. One hook held an unfortunate blue fish, stripped to its spine by the swarming dogs, as they're called. Other hooks had only blue fish heads and gutted whips, the nickname for male dogfish.

The biggest market for dogfish is overseas, where their belly strips are used in fish and chips in Britain or smoked and downed at German beer gardens. At 22 cents a pound, the dogfish doesn't bring much compared to other species, but fishermen limited to a few thousand pounds per day can still earn enough to make a short trip worthwhile.

They just can't fish them for long.

In Massachusetts, for instance, fishermen chased dogfish for just weeks in September before they reached their allocation.

The 5,000-metric-ton federal catch limit is about 1 percent of the 479,000 metric tons scientists say exists. It's far too little to slow the growing population, said University of New England professor James Sulikowski, who studies dogfish behavior and contends regulators may be massively undercounting them.

Satellite monitoring tags Sulikowski put on three dogfish found them frequently at higher depths and far offshore, where survey boats don't go. He guesses there may be at least four times as many as regulators think.

Fordham said if dogfish were devastating the ecosystem and other fish, stocks of haddock, which fishermen say is a favorite dogfish treat, wouldn't be so robust.

Even if fishermen suddenly were turned loose on dogfish, the strict limits over the past decade have withered local markets and infrastructure, such as processors, so it would take time for those to return. Meanwhile, the European market may soon be a tougher place to sell dogfish.

In March, the Convention on International Trade in Endangered Species will consider a European Union proposal to require dogfish exporters to certify their catches were from sustainable fisheries. Opponents say the bureaucracy would make it impossible to get the fish to Europe while it's fresh.

While the rulemakers make rules, Charlie Felch hopes to squeeze three more years out of his business before retiring and leaving the dogfish to someone else. Felch, 58, makes his own gear, and dogfish ravage the gill nets he sets off Seabrook, N.H., sometimes snarling multiple meshes in their mouths as they crowd out the cod and pollock he's after.

He said what he sees, managers don't, and he doesn't know what he can do about it.

"I told my son, I said, 'Please find something else to do. We've got to get out of this. This is nuts,"' Felch said. "You just cannot get away from these things.