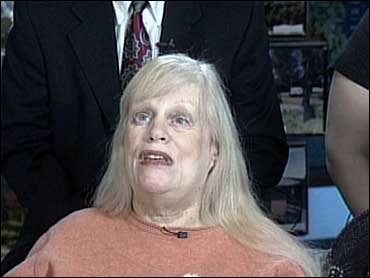 A 62-year-old woman gave birth to a healthy 6-pound, 9-ounce baby boy, becoming one of the oldest women in the world to successfully bear a child.

The newborn is the 12th child of Janise Wulf, who has been blind since birth. She is a grandmother of 20 and great-grandmother of three.

"I believe our only hesitation collectively was her health and her coming through this. Giving birth is hard at any age, in any body, let alone with her being 62," Wulf's 28-year-old daughter, Desiree Myers, told the Redding Record Searchlight newspaper. Myers gave birth to a baby of her own four months ago.

"I hate to raise one alone, without a sibling," said Wulf, who was impregnated both times through in vitro fertilization.

Wulf has given birth to a total of 12 children, although one son died in his 30s and another died at birth with undeveloped lungs. Of her 10 living children, the oldest is 40.

While Wulf isn't the oldest on record, Friday's delivery put her among only a handful of senior-aged mothers.

The oldest woman on record to give birth is a 66-year-old Romanian woman who had a Caesarean section Jan. 15, 2005. Adriana Iliescu was aided by artificial insemination, doctors said.

The Guinness Book of World Records also lists two 63-year-old women who have given birth: Rosanna Della Corte of Italy in 1994 and Acheli Keh of California in 1996. News reports, however, list Della Corte's age at 62 when she gave birth.

Wulf is used to defying the odds. Blind since birth, she was a synchronized swimmer in high school, worked as a piano and organ saleswoman and developed a passion for cooking.

Wulf said Friday that she considers her late-in-life pregnancy a groundbreaking act for older women.

"Age is a number. You're as old as you feel," she said. "Every time you revolutionize something or you do something different, there's going to be naysayers."