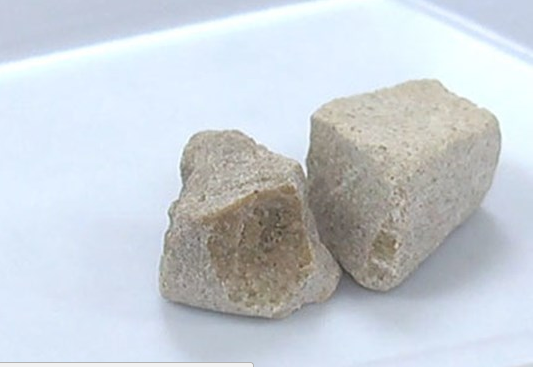 It's being called "gray death" and the new and dangerous drug combination underscores the ever-changing face of the opioid epidemic.

Investigators have found it and recorded overdoses blamed on it in Alabama, Georgia and Ohio.

The drug looks like concrete mix and varies in consistency from a hard, chunky material to a fine powder. It's a combination of several opioids that are tied to thousands of fatal overdoses in the U.S., including heroin, fentanyl, carfentanil (sometimes used to tranquilize large animals, including elephants) and a synthetic opioid called U-47700.

"Gray death is one of the scariest combinations that I have ever seen in nearly 20 years of forensic chemistry drug analysis," said Deneen Kilcrease, manager of the chemistry section at the Georgia Bureau of Investigation.

Gray death ingredients and their concentrations are unknown to users, and they can be particularly lethal, Kilcrease said. And because these strong drugs can be absorbed through the skin, simply touching the powder puts users at risk.

Last year, the U.S. Drug Enforcement Administration listed U-47700 in a category that includes the most dangerous drugs it regulates, saying it was associated with dozens of fatalities, mostly in New York and North Carolina.

Some of the pills taken from Prince's estate after the musician's overdose death in April 2016 contained U-47700.

Gray death users inject, swallow, smoke or snort it. It has a much higher potency than heroin, according to a bulletin issued by the Gulf Coast High Intensity Drug Trafficking Area, an organization based in Louisiana that works with law enforcement and intelligence agencies to reduce illegal drug trafficking and availability in a six-state area of the southern U.S.

The Georgia Bureau of Investigation has received 50 overdose cases in the past three months involving gray death, most from the Atlanta area, said spokeswoman Nelly Miles.

In Ohio, the coroner's office that serves the Cincinnati area said a similar compound has been coming in for months. The Ohio Attorney General's Office has analyzed eight samples from around the state that match the gray death mixture.

"We have put out the bulletin to all of the other drug task forces in Ohio," Lorain County detective Jim Larkin told CBS affiliate KMTV.

"It's amazing to me that they find out one of their friends died from an overdose from the drug and they immediately try to find out where he got it from because they want to try it too," Larkin said. "Why anybody — 'Hey here's some gray death,' but what do you think is going to happen to you? Why do you think it's called gray death?"

The drug combination is just the latest in a trend that's been around for a few years which involves mixing heroin with other opioids, such as fentanyl, to make a more powerful high.

Fentanyl-related deaths spiked so high in Ohio in 2015 that state health officials asked the CDC to send scientists to help address the problem.

The mixing poses a deadly risk to users and also challenges investigators trying to figure out what they're dealing with this time around, said Ohio Attorney General Mike DeWine.

"Normally, we would be able to walk by one of our scientists, and say, 'What are you testing?' and they'll tell you heroin or, 'We're testing fentanyl,'" DeWine said. "Now, sometimes they're looking at it, at least initially, and say, 'Well, we don't know.'"

Some communities also are seeing fentanyl mixed with non-opioids, such as cocaine. In Rhode Island, the state has recommended that individuals with a history of cocaine use receive supplies of the anti-overdose drug naloxone.

Opioids killed more than 33,000 people in the United States in 2015. More than 16 out of every 100,000 Americans died of a drug overdose that year, compared to just over 6 in 1999, according to the U.S. Centers for Disease Control and Prevention. Heroin and other opioids accounted for about half of these deaths.

In Ohio, a state hard-hit by the opioid epidemic, a record 3,050 people died of drug overdoses last year. Most were the result of opioid painkillers or their relative, heroin.

Most people with addictions buy heroin believing that's what they're getting, overdose survivor Richie Webber said. But it's often not the case, as he found out in 2014 when he overdosed on fentanyl-laced heroin. It took two doses of naloxone to revive him. He's now sober and runs a treatment organization, Fight for Recovery, in Clyde, Ohio.

Webber, 25, said a typical new drug combination he's seeing is heroin combined with 3-methylfentanyl, a more powerful version of fentanyl. It's one of the reasons he tells users never to take drugs when they're by themselves.

"You don't know what you're getting with these things," Webber said. "Every time you shoot up, you're literally playing Russian roulette with your life."