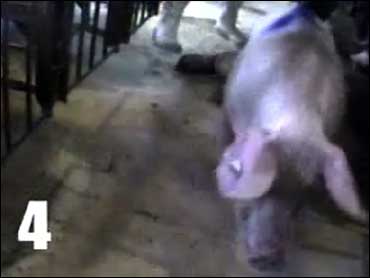 An undercover video shot at an Iowa pig farm shows workers hitting sows with metal rods, slamming piglets on a concrete floor and bragging about jamming rods up into sows' hindquarters.

On the video, obtained by The Associated Press, a supervisor tells an undercover investigator for People for the Ethical Treatment of Animals that when he gets angry or a sow won't move, "I grab one of these rods and jam it in her (anus)."

The farm, located outside of Bayard, Iowa, about 60 miles west of Des Moines, is a supplier to Hormel Foods of Austin, Minn. PETA wants to use the results of the investigation to pressure Hormel, the maker of Spam and other food products, to demand that its suppliers ensure humane treatment of pigs.

"Abuse on factory farms is the absolute norm, not the exception, and anyone eating factory-farmed meat is paying to support it," Friedrich said.

After getting a whistleblower complaint from someone inside the farm, PETA sent two undercover investigators to get hired at the farm and document its practices - one from June 10 to Sept. 8, and the other from July 23 to Sept. 11.

At one point on the video, an employee shouts to an investigator, "Hurt 'em! There's nobody works for PETA out here. You know who PETA is?"

The undercover PETA investigator replies that he's heard of the group.

"I hate them. These (expletives) deserve to be hurt. Hurt, I say!," the employee yells as he hits a sow with a metal rod. "Hurt! Hurt! Hurt! Hurt! ... Take out your frustrations on 'em." He encourages the investigator to pretend that one of the pigs scared off a voluptuous and willing 17- or 18-year-old girl, and then beat the pig for it.

Records at the Greene County Assessor's Office show the property was owned by Natural Pork Production II LLP of Iowa until Aug. 18, and then was transferred to MowMar LLP of Fairmont, Minn.

Lynn Becker, an owner of MowMar, called the abuses on the video "completely intolerable, reprehensible. We condemn these types of acts. If any animals were abused in the brief time we've owned the farm, if we still employ these people, any attempt will made to investigate and initiate corrective action immediately."

Becker said his company provided animal welfare training to the staff when it took over the farm.

Natural Pork Production II referred questions to AMVC Management Services, which managed the farm under its ownership. Mark Jones, AMVC's network manager, said the video showed "unacceptable practices" and that his company is working with the new ownership to investigate.

Craven, the Hormel spokeswoman, said the farm became a Hormel supplier only after the change in ownership, and that MowMar "shares our commitment to animal welfare and humane handling."

Craven said it was her understanding that the abuses took place before the change in ownership. But PETA's Friedrich said the abuses continued, and that the new manager abused animals by shocking and kicking pigs.

Dr. Jennifer Greiner, a veterinarian and director of science and technology at the National Pork Producers Council, said the industry condemns "willful abuse" of pigs and that the video depicts acts that are not acceptable.

"Our industry is committed to handling pigs humanely," she said. "My industry is full of good people."

At one point in the video, workers are shown slamming piglets on the ground, a practice designed to instantly kill those baby pigs that aren't healthy enough. But on the video, the piglets are not killed instantly, and in a bloodied pile, some piglets can be seen wiggling vainly. The video also shows piglets being castrated, and having their tails cut off, without anesthesia.

Temple Grandin, a leading animal welfare expert who serves as a consultant to the livestock industry, said that while those are standard industry practices, the treatment of the sows on the video was far from it.

"This is atrocious animal abuse," Grandin said after PETA sent her the video. But she disagreed with PETA's contention that it was widespread in the industry.

"I've been on many good farms, and the pigs are handled gently," she said. "This was blatant, deliberate animal cruelty. These people are sick. They need to be prosecuted. There are certain people that enjoy hurting animals and they should not be working with them - period."

One of the PETA investigators, who spoke on the condition of anonymity to protect his ability to do further undercover operations, said there was a culture of violence on the farm, and working there was an emotionally and physically exhausting experience that typically involved working 12-hour shifts and walking 15 miles a day.

"So many times, it took all of my willpower not to step up and do something," he said, adding that he also saw the supervisor shove a cane into a sow's vagina. "I was just shocked. What do you say to that?"