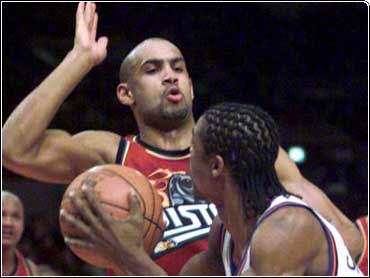 Grant Hill says there's no doubt about it: He's out of the Olympics.

Hill, the Detroit Pistons' star who broke his left ankle in April, said the decision was made more than a month ago based on his doctor's recommendation and his desire to be ready for next season.

"I'm not playing in the Olympics," Hill said Thursday before a promotional appearance in Manhattan. "The doctors advised me not to, although I probably could have played. But I figured I'll get ready for training camp in October."

NBA deputy commissioner Russ Granik said Tuesday there was a "real chance" Hill would miss the Olympics, and possible replacements could be Kobe Bryant of the Los Angeles Lakers or Eddie Jones of the Charlotte Hornets.

Asked if he knew who would replace him, Hill, still on crutches and wearing a walking boot to protect his ankle, said, "I don't know. I think maybe Kobe Bryant, but I'm not sure."

With Hill's Olympic status decided, a bigger question remains: Whose training camp will Hill be in? He becomes a free agent July 1 and says he will explore his options before deciding where to play next season.

"I'm not leaning either way right now," Hill said. " I want to be open ... I want to meet with a few teams and, of course, meet with Detroit and have a frame of reference and the make a decision.

" I don't have a short list. Really, I have spent more time trying to get this leg to heal, and to get away from basketball. It's been a good break."

One team that sounds appealing to Hill is the New York Knicks.

"I've always enjoyed playing here in the city," Hill said. "But I haven't talked with anybody. You're not allowed to until July 1.

"The idea of trying to help Patrick Ewing win a championship is appealing. I grew up a Ewing fan, watching him at Georgetown, wearing No. 33. I've always had a lot of respect for him, and I rooted for them in the playoffs not that they would have done well against the Lakers."

Hill broke his ankle in a playoff game against the Heat on April 25. He had a pin surgically inserted, wore a fiberglass cast for a month and had the walking boot put on two weeks ago.

"I went to the doctor two days ago and now I can start to put weight on the ankle," Hill said. "It'll probably be a few more weeks, then it's on to rehab."