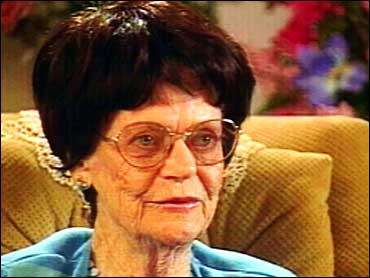 Effie Nielsen,90, uses a walker, but hers runs on gas and cuts her lawn. Nielsen does all her own yard work and that isn't even part of her daily workout.

Every morning, in front of her television, Nielsen goes through a routine that would leave a younger person breathless. Her kitchen is her workout room. Her weights are gallon jugs of water. She lifts two at a time.

That's not all. Nielsen's great-grandson, Michael, encouraged her to enter a weightlifting contest. At this year's Nevada state power-lifting and bench-pressing championships, the 105-pound great-grandmother hoisted 135 pounds and broke three world records.

Besides the exercise and her chores, which include growing her own vegetables, she also begins each day with a concoction of vinegar and honey. If nothing else, the interesting smelling ingredients in this drink will get your attention.

Her lifestyle may be unusual, but there is little question that Effie Nielsen is doing something right. In the weeks since her record-breaking performance in Nevada, Nielsen has appeared on radio and television shows, including CBS' The Late Show With David Letterman.

Nielsen told Letterman that her church is a source of her strength. "I don't feel a bit different being a celebrity," says Nielsen. "I am Effie and I'm gonna' stay that way."

When she's not busy working out or trimming trees or appearing on national TV, Nielsen drives herself to a local genealogy library where she volunteers twice a week. Her grandson Tom says that's the key.

"She doesn't sit in her house waiting for somebody to do something for her," says Tom. "She goes out and moves. And she stays strong because she moves."