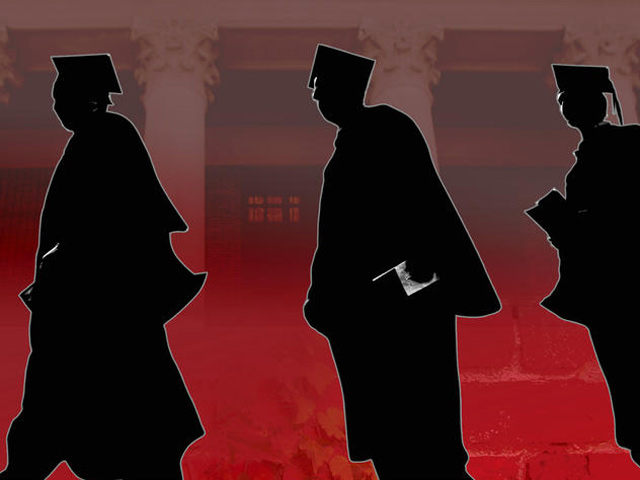 (AP) WASHINGTON — More than half the young black men who graduated high school in 2010 earned their diploma in four years, an improved graduation rate that still lagged behind that of their white counterparts, according to an education group's report released Wednesday.

The Schott Foundation for Public Education, which has tracked graduation rates of black males from public schools since 2004, said 52 percent of black males who entered ninth grade in the 2006-07 school year graduated in four years. That compared with 78 percent of white, non-Latino males and 58 percent of Latino males.

The foundation releases its report every two years. In 2008, the black male graduation rate was 47 percent.

The progress among blacks closed the racial divide on graduation rates by 3 percentage points over nine years to a 26 percentage-point gap.

"At this rate, it would take nearly 50 years for black males to graduate at the same rate as white males," said John H. Jackson, president and CEO of the foundation. "I don't think the country can wait. I don't think any parent or student can wait for half a century to have the same opportunities, education, jobs as their white male counterparts."

The foundation said improving the graduation rates of black and Latino students has become more urgent now that the majority of babies born in the U.S. are minorities.

"These outcomes are not evidence of flaws of young men, but evidence of willful neglect by federal, state, local elected policymakers and leaders," said Jackson, who is participating in this week's Congressional Black Caucus legislative conference, which includes education access on its agenda.

With the release of the report, his organization is calling for a moratorium on school suspensions, which have been shown to be used disproportionately on minority children and children with disabilities. The group also wants more support for students through individual plans that offer help such as tutoring, mental health and health care, tutoring and mentoring so they can catch up in school.

Such support can help children reach the bar that has been set by the standards-driven education approach the country has taken for the past decade, which emphasizes raising standards, assessment and teacher evaluations, Jackson said.

States use different methods to calculate high school graduation rates. The Schott Foundation said it is aware of the differences and calculates graduation rates as the number of students receiving diplomas divided by the number of students in ninth grade four years earlier. It counts only diplomas accepted by post-secondary institutions, not GEDs or local diplomas, offered in some districts for students who are not college-bound.