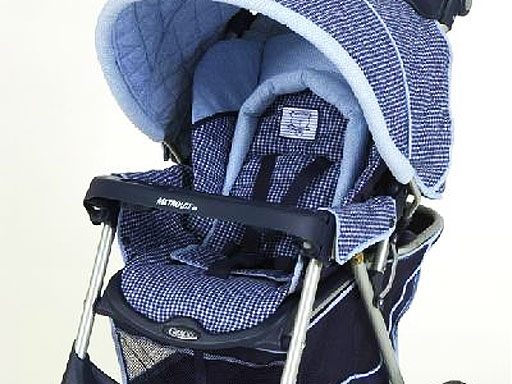 (CBS/AP) Two million Graco strollers were recalled today after reports that four children died as a result of being strangled by the strollers.

Consumers are urged to stop using the strollers immediately.

In addition to the four deaths, which occurred between 2003 and 2005, there have been reports of five infants becoming entrapped, resulting in cuts and bruises, and one report of an infant having difficulty breathing.

Entrapment and strangulation can occur, especially to infants younger than 12 months of age, when a child is not harnessed. An infant can pass through the opening between the stroller tray and seat bottom, but his/her head and neck can become entrapped by the tray.

Infants who become entrapped at the neck are at risk of strangulation.

The strollers and travel systems were distributed between November 2000 and December 2007. The model numbers are printed on a label at the lower portion of the rear frame, just above the rear wheels or underneath the stroller.

The name "Graco" appears on a label on the stroller tray and the headrest.

Models included in the recall are:

Quattro and MetroLite strollers ending with the number 3 are not affected by this recall.

The strollers were sold at AAFES, Babies R Us, Burlington Coat Factory, Fred Meyer, Kmart, Meijers, Navy Exchange, Sears, Target, Walmart and other stores nationwide between November 2000 and December 2007 for between $90 and $190 for the strollers, and between $190 and $250 for travel systems.

The strollers were manufactured in China.

Consumers who have one of the recalled strollers can order a free repair kit by calling Graco (877) 828-4046 or by visiting the firm's website.