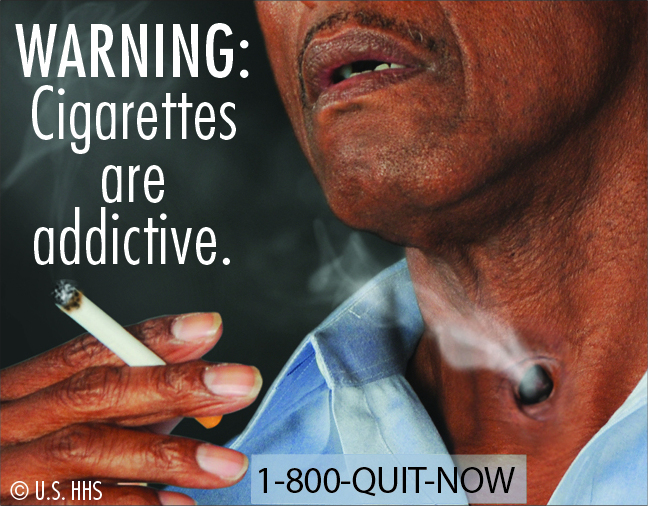 (CBS/AP) The Food and Drug Administration wanted tobacco companies to add graphic warning labels to its cigarette packs by September 2012 to inform the public of smoking's dangers. On Wednesday, a judge blocked that requirement, saying the images - which included a sewn-up corpse of a smoker and a baby surrounded by smoke - violate free speech protected by the Constitution.

U.S. District Judge Richard Leon had first temporarily blocked the requirement in November, saying it was likely cigarette makers will succeed in a lawsuit, which could take years to resolve. His latest decision is already being appealed by the government.

"This Administration is determined to do everything we can to warn young people about the dangers of smoking, which remains the leading cause of preventable death in America," the U.S. Department of Health & Human Services said in a written statement. "This public health initiative will be an effective tool in our efforts to stop teenagers from starting in the first place and taking up this deadly habit. We are confident that efforts to stop these important warnings from going forward will ultimately fail."

The nine graphic images approved by the FDA in June include images of a man exhaling cigarette smoke through a tracheotomy hole; smoke enveloping an infant receiving a mother's kiss; a pair of diseased lungs next to a pair of healthy lungs; a diseased mouth afflicted with what cancer; a man breathing into an oxygen mask; a cadaver on a table with post-autopsy chest staples; a woman weeping; a premature baby in an incubator; and a man wearing a T-shirt that features a "No Smoking" symbol and the words "I Quit." The FDA requirement said the labels would cover the entire top half of cigarette packs, front and back and include a number for a stop-smoking hotline.

Some of the largest U.S. tobacco companies, including R.J. Reynolds Tobacco Co. and Lorillard Tobacco Co., had questioned the labels' constitutionality, saying the warnings don't just convey facts to inform people's decision whether to smoke but instead force the manufacturers to display government anti-smoking advocacy more prominently than their own branding, changes that would cost the companies millions of dollars.

Meanwhile, the FDA has said that the public interest in conveying the dangers of smoking outweighs the companies' free speech rights.

In his ruling Wednesday, Leon wrote that the graphic images "were neither designed to protect the consumer from confusion or deception, nor to increase consumer awareness of smoking risks; rather, they were crafted to evoke a strong emotional response calculated to provoke the viewer to quit or never start smoking."

The judge also said the federal government can turn to alternatives to curb tobacco use, such as increasing anti-smoking advertisements, raising tobacco taxes, reducing the size and changing content of the labels, and improving efforts to reduce youth access to tobacco products.

Floyd Abrams, a lawyer representing Lorillard in the case, said he was pleased with Wednesday's ruling.

"The government, as the court said, is free to speak for itself, but it may not, except in the rarest circumstance, require others to mouth its position," Abrams said.

While the government, public health officials, tobacco companies and others "share a responsibility to provide tobacco consumers with accurate information about the various health risks associated with smoking ... the goal of informing the public about the risks of tobacco use can and should be accomplished consistent with the U.S. Constitution," Martin L. Holton III, executive vice president and general counsel for R.J. Reynolds, said in a statement.

The FDA and the Justice Department declined to comment Wednesday.

Matthew L. Myers, president of the Campaign for Tobacco-Free Kids, said in a statement the ruling was "wrong on the science and the law."

"(The warnings) unequivocally tell the truth about cigarette smoking - that it is addictive, harms children, causes fatal lung disease, cancer, strokes and heart disease, and can kill you. What isn't factual or accurate about these warnings? Not even the tobacco industry disputes these facts," Myers said.

While the tobacco industry's latest legal challenge may not hold up, it could delay the new warning labels for years. And that is likely to save cigarette makers millions of dollars in lost sales and increased packaging costs.

Tobacco use remains the leading cause of preventable death in the U.S., according to the CDC. Currently one in five U.S. adults smoke - that's 45.3 million Americans. Each year smoking causes 443,000 deaths. The CDC warns even occasional smoking can cause harm. Smokers have a greater risk of developing heart disease, stroke, and cancers of the mouth, lungs, pancreas, esophagus, stomach, kidneys, cervix, and bladder.

What do you think of the proposed tobacco warning labels? Do you agree with the judge?