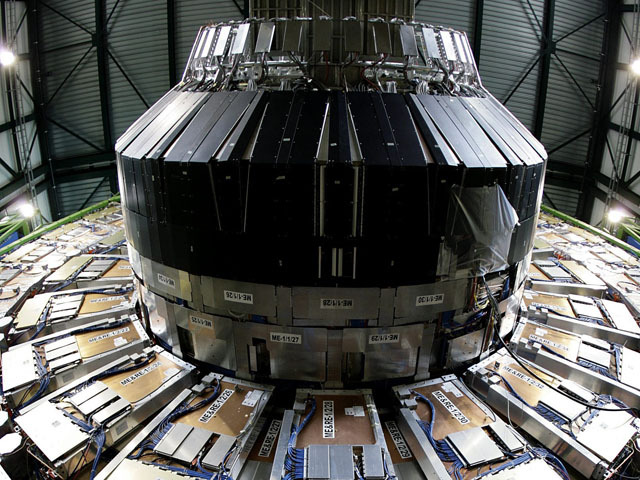 GENEVA - Nuclear scientists announced Sunday they have found a way to "trap" for more than 15 minutes elusive antimatter atoms that used to disappear after a fraction of a second.

That will give scientists at the European Organization for Nuclear Research time to study the atoms properly, in the hope of understanding what happened during the first moments of the universe.

The achievement is a significant improvement on earlier attempts to trap antihydrogen, which like all antimatter has a tendency to disappear before scientists have time to examine it.

"We went from two-tenths of a second to 1,000 seconds," said American scientist Jeffrey Hangst, a spokesman for the ALPHA research team working at the world's biggest particle physics lab - known by its French acronym CERN - on the Swiss-French border.

The history of antimatter
Nature Physics: Confinement of antihydrogen for 1,000 seconds

The team improved the efficiency of the antimatter trap by cooling antihydrogen atoms down to less than 0.5 degrees above absolute zero. Their research was published online in the journal Nature Physics.

Hangst said extending the lifetime of antihydrogen means scientists can be sure it has enough time to settle so it can be probed and compared with hydrogen atoms. The team will begin firing microwaves and then lasers at trapped antihydrogen later this year.

Phillip F. Schewe, a spokesman for the American Institute of Physics, said refining the antimatter trap was a great feat of physics engineering.

"But in a sense it does represent an incremental improvement rather than the achievement of something new," said Schewe, who wasn't involved with the work. "Now they'll have to trap greater number of atoms."

Hangst said the ALPHA team has already trapped about 300 antihydrogen atoms. The more they trap, the easier it is to conduct experiments on antihydrogen.

"This is a big step in demonstrating what we can do and where we can go," he said.

Understanding antihydrogen will help solve one of the biggest riddles of physics. Theorists say both matter and antimatter must have been created in equal amounts in the Big Bang, but antimatter has since disappeared from the natural universe while matter abounds in the stars, planets and galaxies.

Or as Hangst puts it: "Half the universe has gone missing and we don't know why."