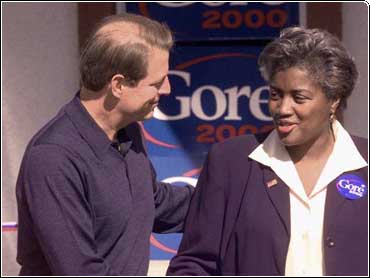 In the interview, Brazile said that "Republicans bring out Colin Powell and J.C. Watts because they have no program, no policy. They'd rather take pictures with black children than feed them."

Those comments prompted a letter from Powell saying that he was "disappointed and offended" by Brazile's remarks and accused her of playing "the polarizing race card" in the campaign.

A campaign spokesperson says that the two had a "good personal conversation" and that she shares the vice president's view that the general is an American hero.

Gore's campaign steadfastly maintains that Brazile did not call Powell to apologize, but sources close to the general say that Brazile repeatedly said the words "I'm sorry."

The vice president, front-runner for the Democratic presidential nomination, was asked about her comments while campaigning in Iowa Friday.

Gore did not defend Brazile's language, but said he agrees with her point.

General Powell is a great hero, who I admire greatly,'' Gore said. "Having General Powell and Congressman (J.C.) Watts in the Republican Party is, in fact, no substitute for an agenda that supports all of our people, including African-Americans. That is what Donna was trying to say.''

Watts, an Oklahoma representative who is chairman of the House Republican Conference, called Brazile's remarks "racist.'' Watts said he and Powell have "worked hard to help African-Americans, especially children.''

GOP presidential front-runner George W. Bush called it "slash-and-burn politics'' and said he would "watch and see how Vice President Gore handles it.''

"It will be an indication of the kind of administration he might have should he win the vote,'' Bush said. "It is unacceptable for her to have done that to two good people.''

Powell has been very popular since his role as America's military leader in the Persian Gulf War. He wrote that his involvement in numerous charities and youth organizations is intended "to help feed, educate and spiritually nourish all of America's children, black and white, and not just for a photo op. And I do so as a Republican.''

He asked that the Gore campaign "not start the new century by playing the polarizing 'race card' which immediately contaminates and destroys the opportunity for open debate on issues of importance to our children.''