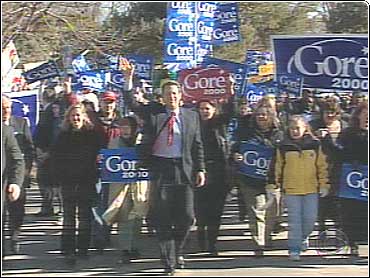 Gore had a change of heart Friday night regarding statements he made during Wednesday's debate with rival Democratic presidential candidate Bill Bradley in New Hampshire. He had clearly stated that support for allowing gays to serve openly in the military would be a litmus test for any future Joint Chiefs of Staff.

"Yes, I would make that a requirement," he said on Wednesday.

On Friday night he said, "I did not mean to imply that there should ever be any kind of inquiry into the personal political opinion of officers in the U.S. military."

But the damage had been done. Military leaders were outraged and Republicans seized the moment.

Gore was also forced to clear the air with retired Joint Chiefs Chairman Colin Powell Friday night. In an interview, Gore's campaign manager Donna Brazile had suggested that Powell is used by Republicans as a substitute for any concrete policies for African Americans.

"I reaffirmed my total respect and regard for him as an American hero," said Gore.

But analysts believe that in an attempt to stop the political hemorrhaging, the vice president opened more wounds.

"The vice president lost his political balance while walking a tightrope, and it's the kind of flip flop that the Republicans are never going to let him forget," said political analyst Marshall Wittmann.

The Gore campaign can ill afford these missteps. While he is still well ahead of Bill Bradley going into the Iowa caucuses, the Vice President is lagging behind in the first primary state - New Hampshire. If Gore makes anything but a strong showing there, it could well set the tone for the big states coming up a month later.